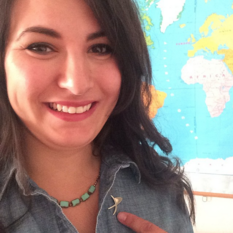 Danielle Gunn, a lifelong fan of science and space, joined the Planetary Society team as communications manager in 2015. She is now the Chief Communications Officer.

Before arriving at The Planetary Society, Danielle enjoyed a career in public radio, most recently as general manager of Chicago's most-listened-to independent radio station, WLUW-FM. Her science communication career began as a volunteer for Illinois Science Council, a non-profit dedicated to educating and entertaining the public about STEM in our everyday lives. In 2014, she became ISC's first Associates Board Chair and led a team of scientists and science enthusiasts in successfully enhancing the organization's fundraising and communications objectives.

Inspired by her hero Dr. Carl Sagan, Danielle is fulfilling her dream of dedicating her life's work to helping advance space science by facilitating implementation of the Society's strategic communications plans, leading social media and new media strategy, and serving as associate producer for Planetary Radio. She lives in Burbank with her writer husband, Dave, and her toddler son Elliott, who loves watching videos of rocket launches.