Our most frequent guest, Cassini Project Scientist Linda Spilker, returns with another update on the magnificent mission at Saturn, including evidence for hydrothermal vents in the oceans of Enceladus! You’ll also hear Bill Nye and the moment when LightSail began to deploy its solar sail. Bruce Betts drops by with many more reasons to watch and wonder in What’s Up. 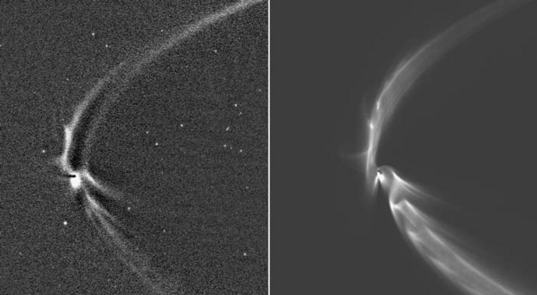 Modeling the geysers of Enceladus

This collage of Cassini spacecraft images and computer simulations shows how long, sinuous features from Enceladus can be modeled by tracing the trajectories of tiny, icy grains ejected from the moon's south polar geysers.

Too bad there’s no contest this week. We were going to give away a new car.

THE CONTEST WILL RETURN IN TWO WEEKS.

There were nine launches of Atlas 5 rockets in 2014.

Hi Linda Spilker; I found your update of the Cassinni mission quite interesting especially the part about Enceladus. I think it is easier to detect evidence of possible life from likely seas in Enceladus than from Europa because there are more regular ice jets from Enceladus. I was glad to hear that your team was able to detect dust grains and methane from these jets that support a subsurface ocean of water on Enceladus. I think I heard you say that on an upcoming pass of Cassinni through the jets of Enceladus this October there will be further search for the contents of the material in the jets. What is the possibility that more definite evidence of possible bacteria or other life that could be in the subsurface ocean of Enceladus some of which could be spouted into space could be detected by Cassinni such as what organic chemicals or other detectable chemicals or material?