The latest guest of the Red Planet arrived in orbit on the evening of September 22, 2014. Planetary Radio Live was watching with fingers crossed in Pasadena, California. On stage with host Mat Kaplan were the Jet Propulsion Lab’s Rich Zurek, the Planetary Society’s Senior Editor Emily Lakdawalla and Director of Science and Technology Bruce Betts. Society CEO Bill Nye the Science Guy joined the celebration from New York. 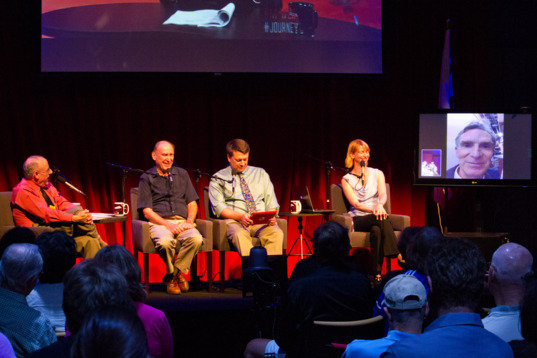 How many orbiters has NASA attempted to send to Mars? How many were successful?

Complete the contest entry form at http://planetary.org/radiocontest or write to us at planetaryradio@planetary.org no later than Tuesday, September 30, at 8am Pacific Time. Be sure to include your name and mailing address.

Barnard’s Star is the star with the largest proper motion of any in the sky.