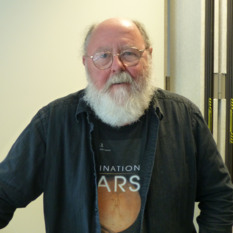 Leonard David has been writing about space exploration for more than five decades.  For a recent Space.com article, he collected information from international experts about what appear to be very ambitious plans by China. Goals may include a permanent space station, as well as putting Chinese astronauts on the moon and, just possibly, on Mars.  Leonard shares what he has learned with Mat Kaplan, and talks about his collaboration with Buzz Aldrin on the new nonfiction book, “Mission to Mars.”

This week's question:
Who was the first person to Tweet from space?

To submit your answer:
Complete the contest entry form at http:planetary.org/radiocontest or write to us at planetaryradio@planetary.org no later than Monday, September 2nd, at 2pm Pacific Time.  Be sure to include your name, mailing address and shirt size.

Last week's question:
In what galaxy did a supernova appear this year?

Question from the week before:
What were the two most recent missions launched specifically to explore Venus, and what have been their fates?

Answer:
Venus Express is still observing the planet, while Akatsuki will make another attempt at orbital insertion in 2015.