Are we missing anything? Let us know at election2016@planetary.org 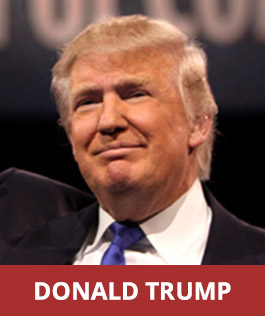 "I will free NASA from the restriction of serving primarily as a logistics agency for low-Earth orbit activity—big deal. Instead, we will refocus its mission on space exploration. Under a Trump Administration, Florida and America will lead the way into the stars."

"A cornerstone of my policy is we will substantially expand public private partnerships to maximize the amount of investment and funding that is available for space exploration and development. This means launching and operating major space assets, right here, that employ thousands and spur innovation and fuel economic growth."

"NASA should be focused primarily on deep space activities rather than Earth-centric work that is better handled by other agencies. Human exploration of our entire solar system by the end of this century should be NASA’s focus and goal. Developing the technologies to meet that goal would severely challenge our present knowledge base, but that should be a reason for exploration and science."

"It makes little sense for numerous launch vehicles to be developed at taxpayer cost, all with essentially the same technology and payload capacity. Coordinated policy would end such duplication of effort and quickly determine where there are private sector solutions that do not necessarily require government investment."

>>> Read the full op-ed at SpaceNews

"My administration will examine spending priorities and will make adjustments as necessary. However, as a businessman, I am mindful of the many benefits, inventions and scientific breakthroughs that would not have been possible without the space program, and that has to be thrown into the calculus, as well."

"Our civilian space program should reflect the scientific priorities and aspirations of our society. Congress will be a full partner in shaping those priorities as the people’s representatives."

On the Mars goal for human spaceflight: "After taking office, we will have a comprehensive review of our plans for space, and will work with Congress to set both priorities and mission."

>>> Read the full set of answers at SpaceNews

September 20th - Written answer to a question posed by ScienceDebate

"Space exploration has given so much to America, including tremendous pride in our scientific and engineering prowess.  A strong space program will encourage our children to seek STEM educational outcomes and will bring millions of jobs and trillions of dollars in investment to this country.  The cascading effects of a vibrant space program are legion and can have a positive, constructive impact on the pride and direction of this country.  Observation from space and exploring beyond our own space neighborhood should be priorities.  We should also seek global partners, because space is not the sole property of America.  All humankind benefits from reaching into the stars."

Q: "What role should NASA play in helping to Make America Great Again?"

A: "Honestly I think NASA is wonderful! America has always led the world in space exploration."

"47 years ago our nation did something that NOBODY thought we could do - we were the first to put a man on the moon. It is time to be number one, again! Believe me, as President, we will once again, Make America First Again!"

"NASA has been one of the most important agencies in the United States government for most of my lifetime. It should remain so. NASA should focus on stretching the envelope of space exploration for we have so much to discover and to date we have only scratched the surface."

On whether Mars should be the goal for NASA: "A lot of what my administration would recommend depends on our economic state. If we are growing with all of our people employed and our military readiness back to acceptable levels, then we can take a look at the timeline for sending more people into space."

Donald Trump, speaking at a rally now near Huntsville, Ala., says he’ll keep the space program “going” as president.

Trump suggests he would make budget cuts in other areas, but not the space program. He did not elaborate (so far) in his speech.

"In the old days, it [NASA] was great. Right now, we have bigger problems, you understand that. We have to fix our potholes. We don't exactly have a lot of money."

"You know, space is actually being taken over privately, which is great. It's being taken over, a lot of private companies going up into space. I like that maybe even better."

It is very sad to see what @BarackObama has done with NASA. He has gutted the program and made us dependent on the Russians.