The Goal Is Mars: The Planetary Society's Submission to the Committee on Human Spaceflight

The following was submitted to the National Academies' Committee on Human Spaceflight in July of 2013.

The Planetary Society strongly supports human exploration of space. The planet Mars is the goal. There, humans will explore efficiently and make discoveries that would utterly change the world. While our robotic missions accomplish remarkable and often astonishing things on Mars, they are precursors in exploration. Astronaut researchers on Mars will make discoveries and create stories that will be shared by all humankind for generations to come.

In 2008, The Planetary Society and Stanford University convened a workshop to examine the future of human spaceflight. The workshop brought together nearly 50 experts, including scientists, former NASA officials and astronauts, industry executives, and space policy specialists for a frank discussion about human spaceflight and our priorities in space. Among the conclusions of this group was that “the purpose of sustained human exploration is to go to Mars and beyond, and that a series of intermediate destinations, each with its own intrinsic value, should be established as steps toward that goal.” Although some of the details have changed over the last five years, the core principles and recommendations outlined in The Planetary Society's report, Beyond the Moon: A New Roadmap for Human Space Exploration in the 21st Century still apply in 2013.

The Benefits of Human Spaceflight are Incalculable 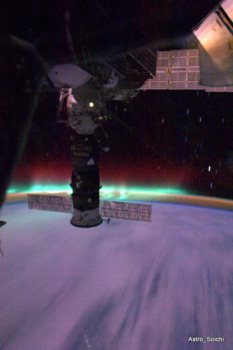 Pretty picture: Fly through the aurora

Noguchi took this photo from his berth aboard the International Space Station on April 5, 2010, as the Station flew through Earth's aurora at 28,000 kilometers per hour. A geomagnetic storm was exciting an unusual level of auroral activity at the time. A Russian Progress module is visible docked to the Station in the middle ground.

Countries with space programs have stronger economies because of the innovations that space missions inherently require, because of the teamwork and organizational structure that must be brought to bear on solving problems that have never been solved before, and because space exploration simply brings out the best in workers and society. With all that, when humans are flying in space, organizations sharpen their focus and do their very best work to support their comrades – fellow citizens of Earth. It is a unique and especially productive use of a society's intellect and treasure.

The effect of humans in space is obvious when one compares the public’s response to human achievements on the Moon with the achievements of robotic missions, which may have accomplished somewhat more scientifically but with enormously less inspiration. The Soviet Union’s space agency was the first to land a spacecraft softly on the Moon and to drive a rover across its surface. It was the first agency to photograph the far side of the Moon. They accomplished the first robotic sample return mission from another world. They put spacecraft in the atmosphere and on the surface of Venus. Nevertheless, it was the Apollo human landings that changed the world. The exploits of the astronauts are writ larger on the pages of history, because the human stories are so compelling for us.

While the robotic planetary science program accomplishes remarkable and often astonishing things, there is a great deal more waiting to be learned by sending people to Mars. When an astronaut is engaged, the whole world is engaged. NASA's Curiosity landing was watched by millions of people around the world. A human mission will be watched by billions. When we explore Mars, two remarkable things will happen: we will make discoveries that require the unique skills and capabilities of the human brain, but we will also have an adventure. People everywhere will share in both.

Keeping humans in space is the ultimate expression of an advanced civilization. Not only does it require heavy and constant investment in technology, engineering capability, and industry, it demands cooperation by tens of thousands of people in a complex hierarchy. The sheer complexity of the mission binds people together peacefully, both at home and abroad.

Few endeavors elicit so much pride, inspiration, and optimism. Astronauts inspire countless millions of people to pursue careers in high technology, engineering, and science. While robotic spacecraft can be anthropomorphized in their adventures, human astronauts need no such conceptual leap. They represent the best in us as they push the boundaries of our species farther into space.

The greatest threat to the human spaceflight program is the lack of a clear goal.

We live in a truly remarkable time technologically, where nothing prevents humans from exploring Mars or other targets save for our own decisions not to do so. If a plan were created that united our government and the space community, we could pursue a truly adventurous, exceptional program of human exploration that would span decades. This is not unprecedented.  Both the International Space Station and the Space Shuttle programs garnered the political and financial commitment to sustain them for many years.

Without a clear goal to guide NASA, the Administration, Congress, and the aerospace community, the human spaceflight program is subject to swings in focus, leading to funding cuts, inefficient spending, and ultimately the dwindling of public support. Continued division could doom the endeavor.

With Mars as the clear goal, space agencies around the world – and NASA especially – will be able to streamline their efforts. Space exploration will become more efficient. Present and future lawmakers will not need to spend time, effort, or energy proposing human missions to destinations that are not consistent with the goal of successfully landing humans on Mars.

The Planetary Society published Beyond the Moon five years ago. We stand by those recommendations today. It is in our best interest to develop an exploration architecture whose ultimate goal is to enable the human exploration of Mars. This architecture should incorporate new, culturally significant scientific achievements as steps toward Mars, including the following:

Landing on Mars is a challenging endeavor that must be recognized and planned as a multi-decade program with clear milestones, stable funding, and sustained national commitment. Current implementation of the program has lacked these essential elements.

What If We Do Not Accept the Challenge of Human Spaceflight? 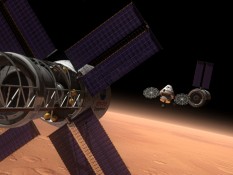 Artist's conception of the MPCV performing a rendezvous during a deep-space mission.

The ramifications of not accepting the challenge of human exploration of space – particularly Mars – are troubling. It is the key to our nation's future in innovation. If we terminate or curtail human spaceflight, we are condemning our progeny to live their lives with less. Other countries with robust space agencies will find themselves leading the world in innovations and technology. Their superior economies will outperform that of the U.S.

There are the deep and important cultural implications if we don't explore. What does it say about a society that forever looks down at its feet? Worse yet, what does it say of a society that looks down knowing full well that it could look up and out, yet chooses not to? Are we prepared to be the first generation to declare exploration to be more trouble than it's worth? How do we explain to our progeny that we just decided to stop?

Science, exploration, and technology are inseparable. One leads to the other. Science is a beneficiary of human spaceflight but it is not the primary motivation. Many of the great human explorations of the past – including the Apollo missions to the Moon – were undertaken primarily for cultural or political reasons but still resulted in revolutionary scientific advances and new capabilities. Countless discoveries will remain unknown if we walk away from human space exploration.

We should all acknowledge that if we were to discover evidence of past life on Mars, or stranger still something still alive there, it would utterly change the world. Such a discovery would be akin to those made by Copernicus or Galileo. It would change the way everyone everywhere views his or her relationship with the cosmos, our place in space.

With Mars as the destination for future explorers, NASA can streamline its human exploration endeavor to take us where we've never been – returning unprecedented knowledge and inspiring generations to come. The human imperative to experience and understand our planetary neighborhood would continue, as it has for generations. Space exploration carries with it the promise of a hopeful future. The time to take the next bold step into that future is now.