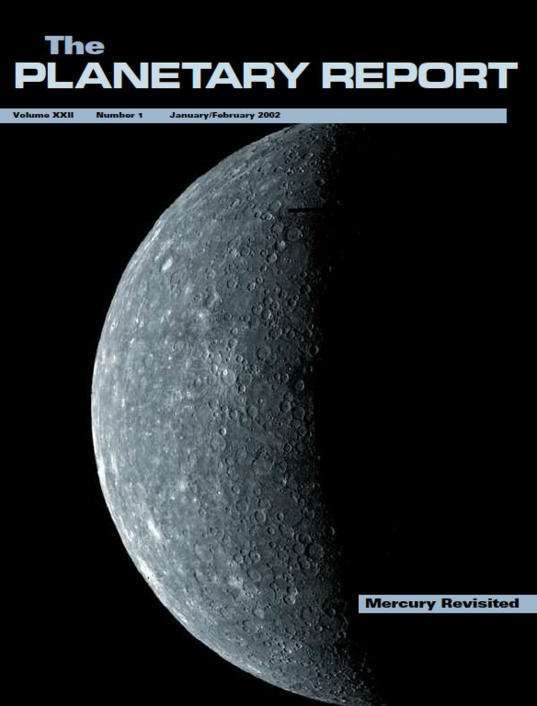 On the Cover: This mosaic of Mercury is compiled from images taken by Mariner 10 as it approached the planet on March 29, 1974. Mercury's ancient cratered surface can tell us much about the formation of the inner solar system. In the next decade, two new spacecraft will visit Mercury, the least-explored terrestrial planet, to continue the exploration Mariner 10 began almost 30 years ago.
JPL/NASA. Reprocessed by Mark S. Robinson, Northwestern University

4 Opinion: Whither, O Splendid Ship? Jim Burke, who led the United States' first attempt to reach the Moon, and John Young, the first man to have flown in space six times, take the title of this opinion piece from a Robert Bridges poem evoking the bold, adventurous spirit that drove mariners in an earlier age of exploration.

6 The Little Planet With the Big Iron Heart: Robert Burnham explores the revisited interest in Mercury and details plans to send spacecraft to study the planet.

12 From the Earth to Mars Part One: A Crater, Ice, and Life: Pascal Lee begins here a two-part feature on the Haughton Mars Project, which may one day lead humans to Mars.

19 The 2002 Shoemaker NEO Grants: It's Time to Propose: Dan Durda urges you to submit your proposals!

18 World Watch Upcoming NASA and ESA missions, the NASA budget, and the future of Arecibo

20 Q&A Why don't the terrestrial planets in our solar system have rings? Would solar systems around double stars be like ours?