To Mars - Step by Step 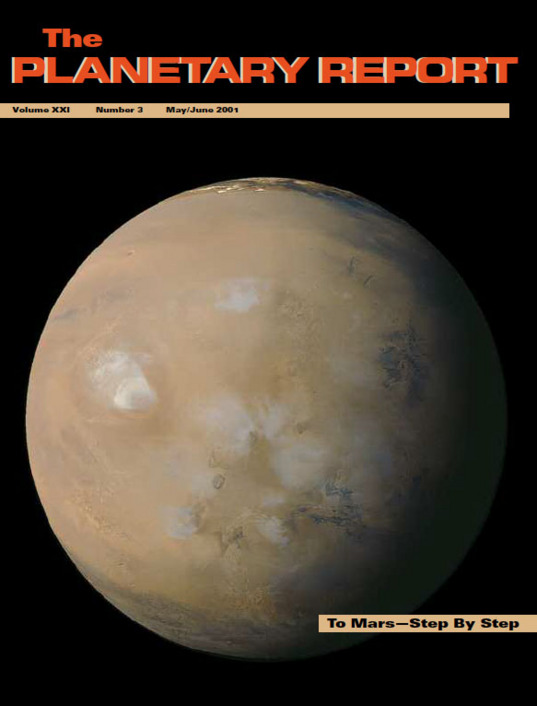 On the Cover: In the afternoons of Mars’ northern summer, it’s not uncommon to see clouds over the planet’s Tharsis volcanoes, visible just below center in this image. The bright white cloud at left hovers over Olympus Mons. This portrait, completed on April 10, 1999, is a computer-enhanced color composite of red and blue image strips taken by Mars Global Surveyor in March 1999.
MSSS/NASA

4 We Can All Go to Mars: Bruce Murray and Louis Friedman talk about the Society's overarching theme that might provide a focus for exploring Mars and to get us there a little faster.

6 To Fly a Solar Sail: A Story of Friendship: Charlene Anderson looks at Cosmos 1 and discusses the recent accident, which has not derailed the mission.

12 A NEAR Perfect Landing: Melanie Melton reports on some of the results of the skill and daring of the NEAR team landing on the asteroid Eros.

16 Red Rover Goes to Mars: Student Scientists Make History: Rachel Zimmerman presents some of the activities and discoveries made by our student astronauts.

18 Mars Odyssey: A Good Day to Launch: Glenn Cunningham offers a first-hand report on the launch of this next spacecraft to Mars.

20 Q&A How do we photograph the Milky Way from inside? Why is there controversy over the existence of the Oort Cloud.