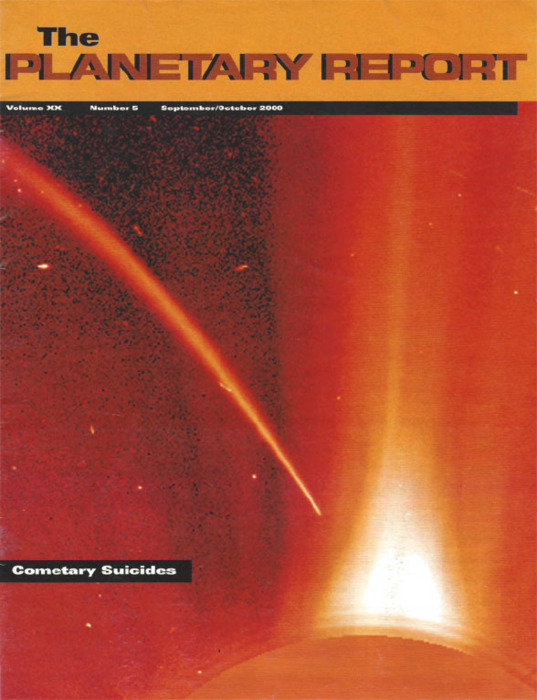 On the Cover: An orbiting telescope designed to study the Sun has also proved effective at finding comets. Professional and amateur comet-hunters alike are detecting comet after comet in data returned by the Solar and Heliospheric Observatory (SOHO). This image of a comet plunging into the Sun's corona was taken on December 23, 1996 by the Large Angle Spectrometric Coronograph (LASCO) on SOHO. Better known as the "Christmas Comet," SOHO-6 was, as its name suggests, the sixth comet found by the spacecraft. The solid orange area at bottom is a mask to block out the brilliant disk of the Sun.
NASA/European Space Agency (ESA)

4 Flowers for Mars: Chris McKay has spent his entire career considering the possibility and potential of life on other worlds, and in this column he floats the idea of a flower on Mars.

6 Hunting Snowballs in Hell: Robert Burnham reports on the dozens of comets unexpectedly discovered by the Solar and Heliospheric Observatory (SOHO).

12 Unearting Seeps and Springs on Mars! Bruce Jakosky describes a controversial finding of recently formed features on Mars that appear to have been carved by liquid water.

20 An Antarctic Idyll: For technical editor Jim Burke, long-time dedicated service to the Society led him to an impromptu trip to Antarctica.

18 Q&A Could the K-T impact have flung debris from Earth into the solar system?