Spiraling in to Io 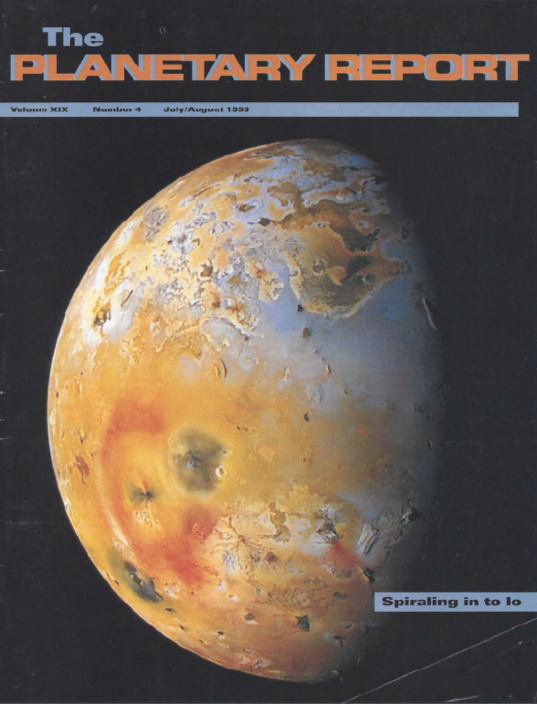 On the Cover: It's beautiful; it changes every time we see it. It's Io, the most volcanically active object in human experience. This look is from Galileo's 10th orbit through the Jupiter system. On previous orbits, the red halo surrounding the volcano Pele was the most prominent feature in the southern hemisphere. On the 9th orbit, Galileo saw a gigantic plume, 120 kilometers (75 miles) high, from an eruption near Pele, from a volcanic center called Pillan Patera. On the next orbit, a large, dark feature, 400 kilometers (about 250 miles) in diameter, had broken Pele's red halo—one of the most dramatic changes seen on Io. Galileo took this image on September 19, 1997, from a distance of 500,000 kilometers (about 310,000 miles)
JPL/NASA

4 Opinion: Why is the Day 24 Hours, and When Will the Millennium Begin? Owen Gingerich of the Harvard-Smithsonian Center for Astrophysics is one of Earth's preeminent historians of science. This question of when to mark the end of the current millennium is one of the most contentious we've heard at The Planetary Society. So, here it is, our unofficial final word on the subject.

8 In the Beginning: Since The Planetary Society began nearly 20 years ago, Jim Burke has been our resident "Moon man." Here he reflects on Earth and Moon's shared story, and the history of humanity's attempts to understand their origins, in this essay that shares his passion with our members.

12 Galileo: On to Io and Cassini: Galileo's saga must be the most complex in the history of our explorations of other worlds. Now, a bit doddery but still functional, Galileo undertakes a rendezvous with Cassini. Galileo imaging team lead Michael Belton reports on this next task for the mission.

Special Insert: Join at Mission to Mars at Planetfest '99

20 Q&A What happened to the Mars-sized body that collided with Earth to form the Moon?