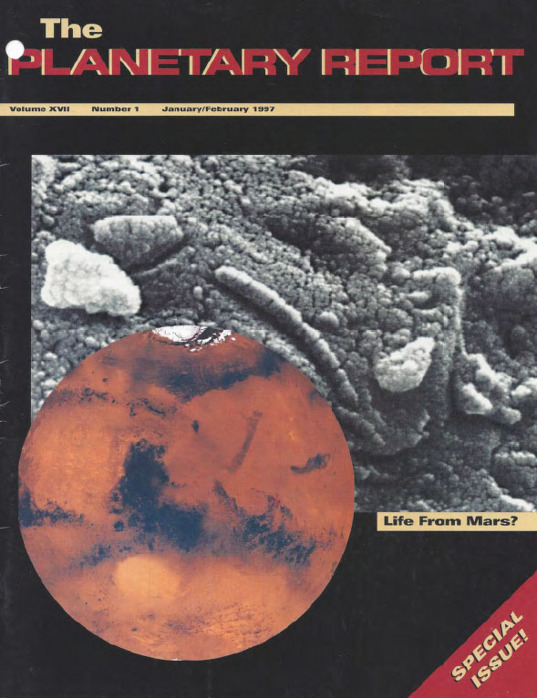 On the Cover: Is it life? Or is it a bit of dried clay that somehow assumed a shape that resembles the form of certain bacteria on Earth? The segmented object at center is one piece of evidence marshalled by a team of NASA and university scientists to suggest that a rock from Mars holds evidence of ancient life. Spacecraft have taught us that the Red Planet once possessed the conditions needed for life. Might life have arisen there, and could it exist today? These questions could be answered by future spacecraft, and the tiny, elongated forms found within a Martian meteorites have renewed popular interest in exploring other worlds.
Top image: NASA / Johnson Space Center; Bottom image: Viking project, JPL

4 Life From Mars? The Story and its Implications: Our coverage of the martian life question begins with excerpts from a provocative and stimulating university symposium compiled by Charlene Anderson.

5 The Thrill of the Search: Finding ALH84001: The discoverer of the martian meteorite, Roberta Score, tells us how she found the rock in Antarctica.

8 Uncovering Martians Hidden Among Us: The Source of ALH84001: Discovering the source of ALH84001 required hard work—and a happy mistake—as related here by the scientist who uncovered the rock's ancestry, David Mittlefehldt.

12 Laying Out the Evidence: The Case for Life on Mars: Leading planetary scientist Bruce Jakosky presents the case both for and against the claim that the meteorite found in Antarctica contains evidence of ancient life on Mars.

18 Is the Case Persuasive? A Skeptical View: Biologist Michael Yarus argues that life on Mars is possible but the current claim is unconvincing.

20 Standard of Evidence: How High for Ancient Life on Mars? Can the case be conclusively proven? Philosopher Carol Cleland explores that crucial question.

21 Life on Another World: Can Religion Cope? Over the centuries, religions have sometimes had trouble coping with scientific discoveries. Will the possibility of martian life provoke any religious resistance? Professor of Religious Studies Rodney Taylor reports.

22 Our Martian Destiny: Perhaps more than any other living writer, Ray Bradbury is identified with Mars. Here are his thoughts on the possibilities contained in ALH84001.

23 The Launch and Loss of Mars '96: The failure of this ambitious mission is a severe blow to space programs around the world—as well as to The Planetary Society and its members, as Louis Friedman explains.

24 Society News Come to a Hale-Bopp party; countdown to Planetfest '97.

28 Q&A What are the "channels" referred to when listening for extraterrestrial signals?