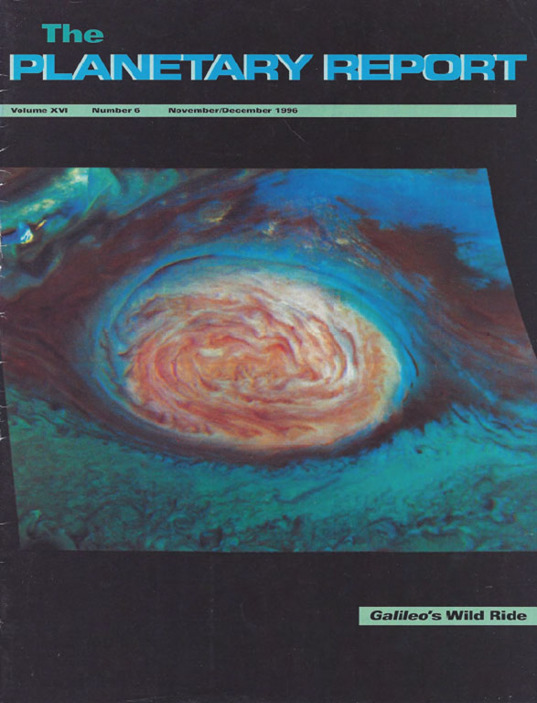 On the Cover: A familiar jovian feature appears at the Great White Spot in this false-color rendition created from data gathered by the Galileo spacecraft. Here the colors indicate cloud heights, not the composition of the particles that give Jupiter's atmosphere its predominant red, white and orange tints. In this image, white indicates high, thick clouds. For example, the while areas near the north edge of the gigantic cyclone are little thunderstorms. In natural light, the Great Red Spot appears red because of a high haze swirling at the top of the storm. So here, it is white. New products such as this are giving scientists new ways of learning about Jupiter.
JPL/NASA

4 The Wild Ride of the Galileo Probe: Sampling Jupiter's Atmosphere: Richard Young, the leader of the Galileo probe science team, presents their results from the first in-situ measurements ever taken of the giant planet's atmosphere.

10 Aiming for the Red Planet: Japan's Planet-B Mission: Tatsundo Yamamoto and Koichiro Tsuruda discuss Japan's plans for their first Mars mission, with the goal of looking at the planet's little-explored upper atmosphere.

12 Galileo's First Look at Ganymede and Europa: Charlene Anderson showcases some of first stunning images of these Galilean moons to be returned to Earth.

17 A Great Year: Louis Friedman looks back at 1996, a year for which NASA is worth a lot of praise.

19 Q&A How localized are meteor showers?