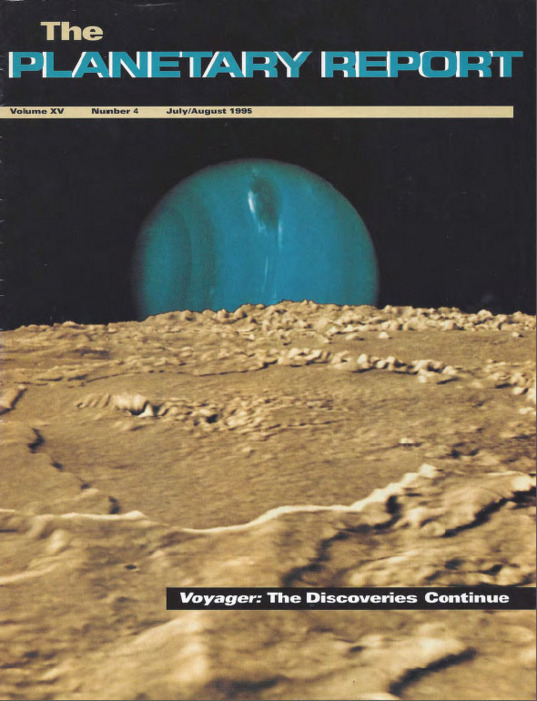 On the Cover: Neptune hangs on Triton's horizon in this three-dimensional view created from Voyager images. While this view is dramatic, it isn't what an explorer would actually see while flying over Triton: The relief has been exaggerated about 30 times. In the foreground are Triton's maria ("seas"), with terraces testifying to several episodes of volcanic flooding—only the floods were of molten ice, not rock. Voyager's greatest legacy is that the spacecraft revealed strange worlds such as this to us for the first time.
USGS Flagstaff

4 What's New, Voyager: The Discoveries Continue: Ellis Miner presents some of the amazing discoveries and images returned by the Voyager spacecraft.

10 Journey to the End of the Dinosaur Era: A Society Expedition to Belize: Adriana Ocampo reports on an expedition in search of evidence of what killed off the dinosaurs.

3 Members' Dialogue Mining the Moon; support for a Pluto mission.

15 World Watch A time of crisis in planetary exploration.

20 Q&A Van Allen belts and the Shoemaker-Levy 9 impact into Jupiter.