The Mars Balloon: It Works! 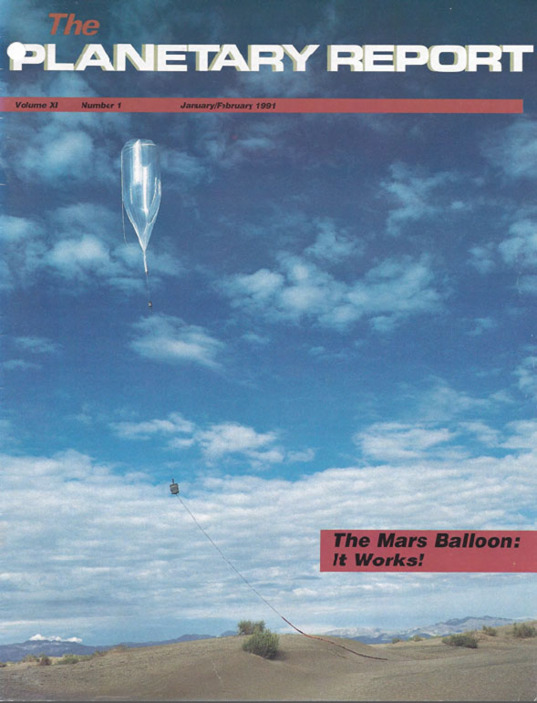 On the Cover: There is no other private group on Earth that can say of a planetary project, "We're scheduled for launch in 1994," But the French-built Mars Balloon, equipped with the SNAKE guide-rope designed by The Planetary Society, is an intrinsic and official part of the Soviet Mars '94 mission. Last summer, during tests in California's Mojave Desert, we proved that our design works.
Charlene M. Anderson

4 Humans to Mars: Can We Justify the Cost? Carl Sagan explains the value of sending humans to Mars.

8 Mining the Air: Resources of Other Worlds May Reduce Mission Costs: Kumar Ramohalli explains how we could mine the atmospheres of other planets to create fuel.

12 Wind, Sand and Mars: The 1990 Tests of the Mars Balloon and SNAKE: Charlene Anderson summarizes tests in the Mojave Desert in preparation for the Mars '94 mission.

16 Eureka! The Recovery of 1982DB: Asteroid hunter Eleanor Helin tells a story of 8 years of persistence paying off.

19 World Watch Recommendations for NASA from the Advisory Committee on the Future of the U.S. Space Program.

20 Q&A What major discoveries resulted from the Apollo landings?