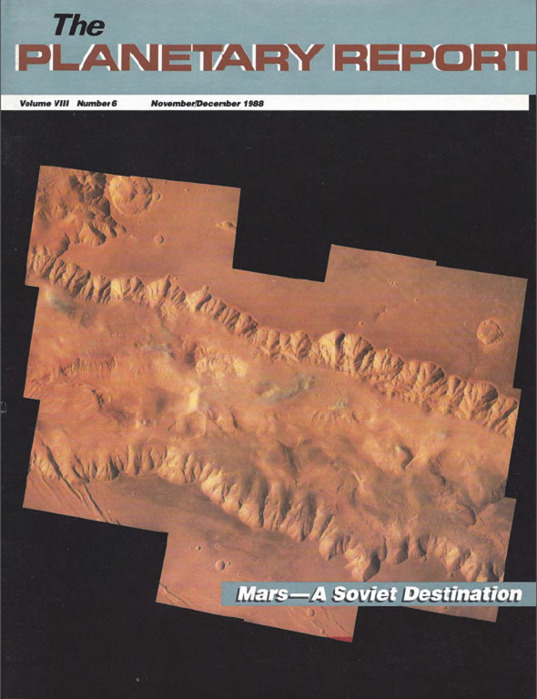 On the Cover: Valles Marineris, the Red Planet's "Grand Canyon, " stretches one-fifth of the way around Mars. Within its walls lie records of the planet's geologic past. This computer-constructed mosaic of Viking images shows a portion of Candor Chasma, a small section of the larger canyon complex. In the region shown, the canyon is about 9 kilometers deep and 100 kilometers wide. Its floor is covered with landslide debris and layered deposits, perhaps the remains of an ancient lake.
Lisa Bertolini and Alfred McEwen, USGS

4 The Way to Mars: V. Glushko, Y. Semenov, and L. Gorshkov lay out the Soviet Union's plans for Mars exploration.

9 A Soviet View of a Lunar Base: Vladislav V. Shevchenko discusses how humans can colonize the Moon, and what science we should do on the surface.

13 Oceans on Venus—The Great Debate: Charlene Anderson introduces a pair of articles looking at the evidence for and against the presence of past water on Venus:

3 Members' Dialogue The Moon vs. Mars.

24 Q&A Why does Phobos have such an unique orbit?