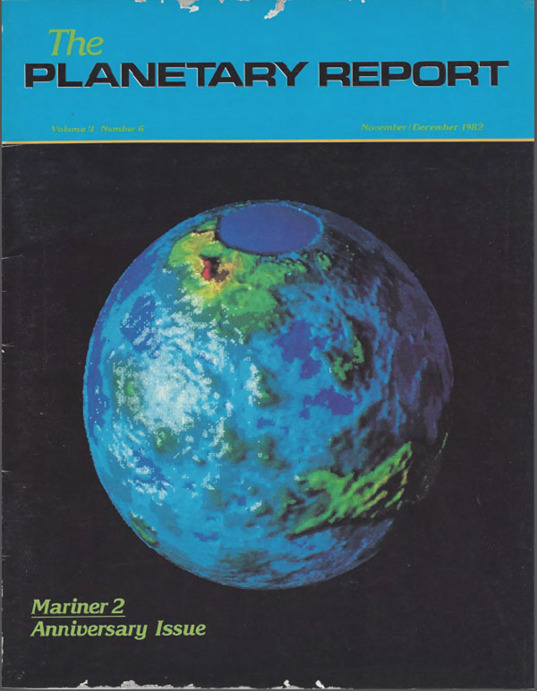 On the Cover: This computer-generated view of Venus shows the planet's topography, with the highest regions coded as red and the lowest as dark blue. The radar of the Pioneer Venus Orbiter provided the altimetry data from which this image was generated, and can also detect small-scale surface roughness. Rougher areas are coded as a white glint on this picture.
Drs. James Blinn and Walter Brown, JPL

4 Remembering Mariner 2: J. N. James looks back on Mariner 2 on its 20th anniversary.

7 The Race to Venus and Mars: James D. Burke gives a timeline of the space race to our nearest neighbors.

8 How We Discovered That Venus is Hot: Carl Sagan summarizes the critical information from Mariner missions and telescopic observations of Venus that led to our greater understanding of its surface conditions.

11 Mariner 2 and the Discovery of the Solar Wind: Marcia Neugebauer describes how Mariner 2 discovered the solar wind on its journey to Venus.

14 Highlights of the Venera Missions to Venus: M. Ya. Marov showcases the revelations the Venera missions provided on shrouded Venus.

19 Washington Watch Funding for future missions to Venus and Galileo.