China's New Lunar Missions Are on the Way

Long Xiao is a planetary geoscientist at China University of Geosciences (Wuhan) and Macau University of Science and Technology. He studies major geological processes of all solid bodies in the solar system, focusing recently on characterizing the geology of China’s lunar and Martian landing sites. He also studies Earth analogs of past and present habitable environments on Mars.

Chinese landers are set to achieve big goals on the Moon in late 2018. One will perform the first-ever landing on the lunar farside, and the other will return samples from the lunar nearside. These two robotic explorers continue a series of successful lunar exploration missions. 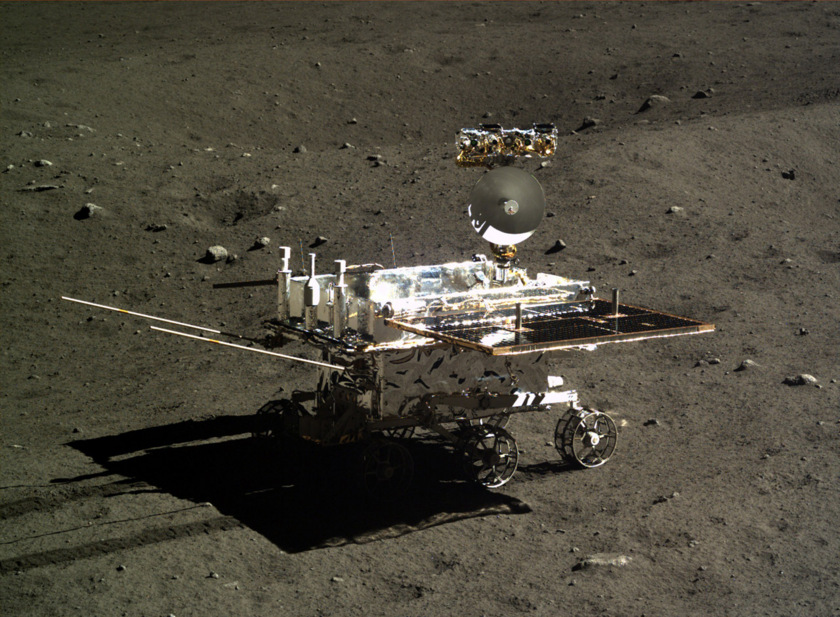 Yutu (or “Jade Rabbit”) explores the lunar surface after being deployed by Chang’e-4’s predecessor, Chang’e-3. Chang’e-4 will carry a similar rover to the first-ever landing on the lunar farside.

China always planned these missions to be part of a 3-phase robotic lunar exploration program: orbiting (Chang’e-1 and -2), landing (Chang’e-3 and -4), and sample return (Chang’e-5 and -6). The Chinese space agency has produced two spacecraft for each phase, launching one at a time. Chang’e-4 launches in 2018 and Chang’e-5 in 2019.

China’s lunar exploration began with the Chang’e-1 and Chang’e-2 orbiters in 2007 and 2010, named for a mythological Moon goddess. These first two missions demonstrated technical success and were China’s first explorations beyond Earth’s orbit. They acquired high-resolution global images, measured microwave radar properties of the lunar surface and shallow subsurface, mapped elemental composition, and sampled the lunar plasma and radiation environment. 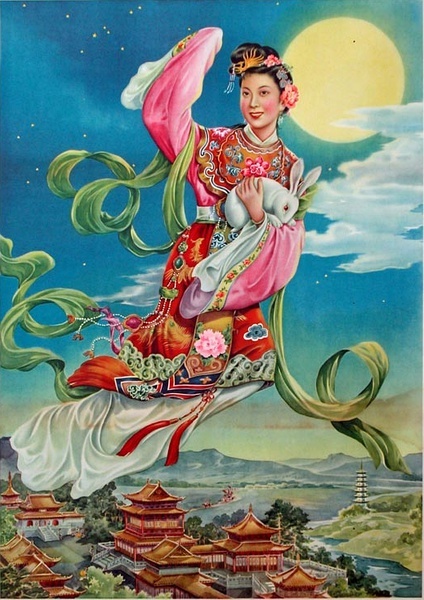 Chang'e flying to the Moon

Chang’e is a Moon goddess in Chinese legend, a central character in the annual Mid-Autumn or Moon festival (which is on 24 September in 2018). Her companion Yutu, the Jade Rabbit, mixes elixirs for the other immortals in his mortar and pestle. Queqiao, or “magpie bridge,” features in a different legend, a love story about a flock of magpies that form a bridge crossing the Milky Way once a year to reunite the Cowherd and the Weaver Girl.

Chang’e-3 followed in 2013. The Chang’e-3 lander and its rover, Yutu (“Jade Rabbit,” another resident of the Moon in Chinese mythology), were the first visitors from China to land on an extraterrestrial surface. They also performed the first soft landing on the Moon since the Soviet Union’s Luna 24 mission in 1976. The rover explored northern Mare Imbrium, used radar to sense subsurface layering, examined youthful volcanic rocks of a new type, and measured the light-reflecting properties of the regolith (the broken-up rock and dust that make the lunar soil). These achievements produced new knowledge about the Moon and also stimulated public enthusiasm, enabling support for further lunar exploration by China. 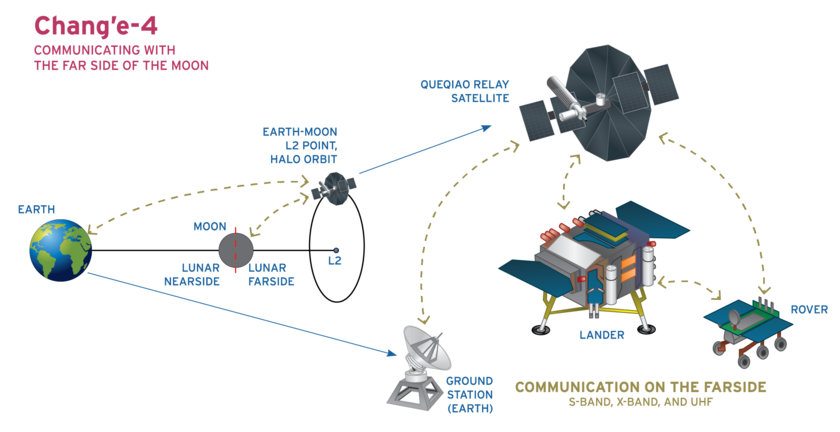 CHANG’E-4 TO THE FARSIDE

Chang’e-4 will be humanity’s first landed exploration of the lunar farside. The challenge faced by a farside mission is communications. With no view of Earth, there is no way to establish a direct radio link. Thus, the mission will be carried out in 2 steps. On 20 May UTC (21 May in China), China launched a relay satellite toward the Earth-Moon Lagrange Point 2 (L2), located 65,000 kilometers (40,000 miles) beyond the Moon. The Chang’e-4 relay satellite, which is named Queqiao (“Magpie Bridge”), will move in slow circles around the L2 point, remaining visible to both ground stations on Earth and the lander and rover on the lunar farside at all times. 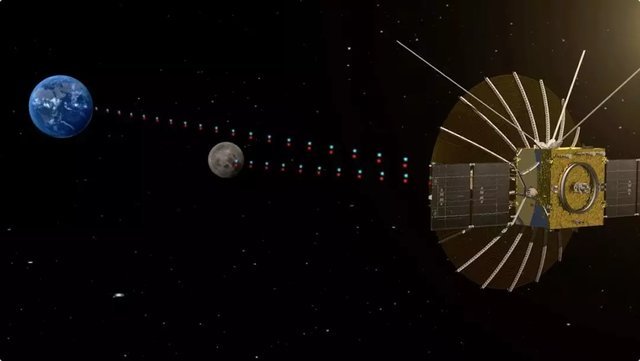 The Chang’e-4 relay satellite, Queqiao, operates in a stable orbit beyond the Moon and is able to see Earth and the lunar farside at the same time. It launched on 21 May 2018 and awaits the lander’s arrival. Queqiao image: CNSA

Two microsatellites, Longjiang-1 and Longjiang- 2, accompanied Queqiao onto its lunar transfer trajectory. Longjiang-1 failed soon after launch, but Longjiang-2 entered lunar orbit on 25 May. It will perform low-frequency radio astronomy observations, using the Moon to shield its instruments from interference from Earth. It will also take photos of the Moon and Earth using a microcamera contributed by Saudi Arabia.

The second part of Chang’e-4, a lander and a rover of similar design to Chang’e-3, will launch in late 2018 or early 2019. The Chang’e-4 mission has 3 scientific goals. It will do lowfrequency radio astronomy from lunar orbit with a Netherlands-China Low-Frequency Explorer and also from the surface with a lowfrequency radio spectrometer. It will study the shallow structures of the farside landing site using rover ground-penetrating radar. Finally, the rover will examine the geomorphology and mineralogy along its traverse with a visible/ near-infrared imaging spectrometer. 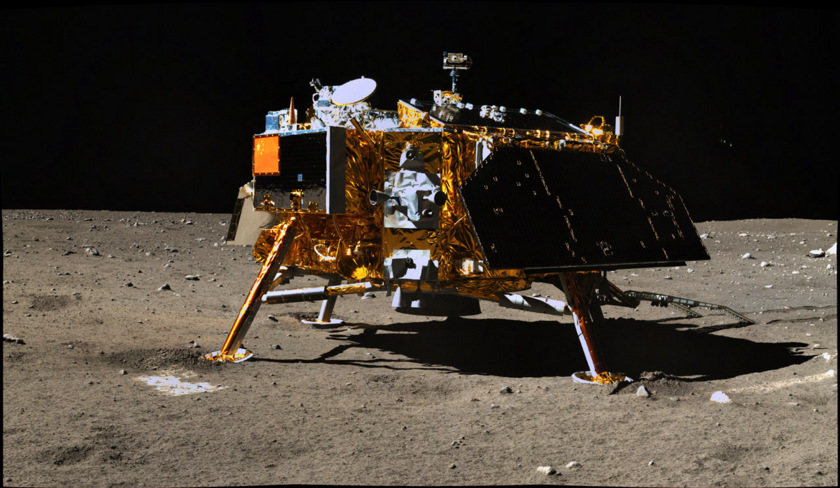 This photo of the Chang’e-3 lander was taken by the Yutu rover before the rover’s premature failure. The lander is still operating an ultraviolet telescope on the lunar surface more than four years later. Chang’e-4 is nearly the same design, with different science instruments.

The selected landing region for Chang’e-4 is within the South Pole-Aitken (SPA) basin, the Moon’s largest, deepest, and oldest impact structure. Its depth and gravity measurements suggest that the huge impact may have exposed the Moon’s mantle. Chang’e-4’s data will illuminate the history of the SPA basin.

Chang’e-4 is targeting the floor of the Von Kármán crater in its southern portion (45°S - 46°S, 176.4°E - 178.8°E). The Von Kármán crater is an ancient, complex impact crater located within the SPA basin. The science team hopes to study the existence and extent of variations in composition of the sheet of melted rock that would have filled the newly formed SPA basin, and we hope to possibly study exposed upper-mantle materials. Scientists also expect to improve understanding of the farside space environment and the evolution of farside regolith, the broken-up rocks and dust that make the lunar surface. 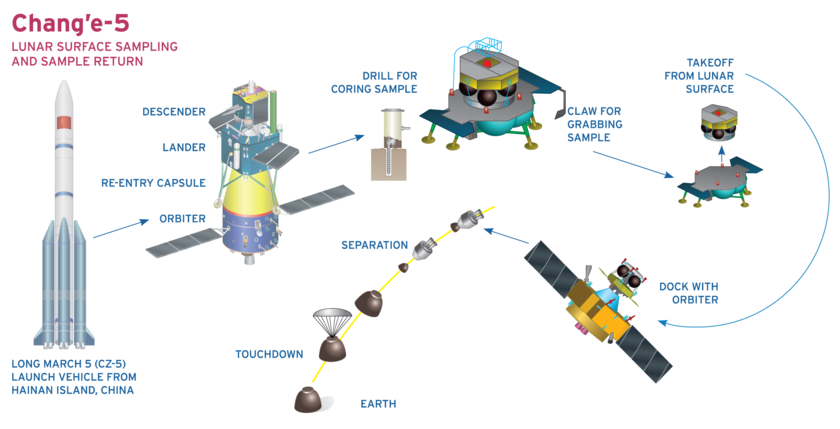 Chang’e-5, scheduled to launch in 2019, is China’s first lunar sample return mission. It will provide an opportunity to study new lunar samples in terrestrial laboratories for the first time since Luna 24. Geologists have solved numerous fundamental scientific issues in lunar science with samples returned by the Apollo and Luna missions. The returned samples initiated a golden age of lunar research that continues to this day, as newly developed laboratory techniques allow scientists to perform new science on old samples. However, most of the Moon remains unexplored, and there are still many scientific questions that could be answered with new rocks and soil from the Moon.

Chang’e-5 will launch a large spacecraft stack including an orbiter with a re-entry capsule and a lander. The lander has no rover; instead, it has an arm to grab from the surface and a drill that can sample from a depth of 2 meters. The lander will have cameras and ground-penetrating radar similar to those on Chang’e-3 and 4, plus a lunar mineralogical spectrometer that can take spectra in the visible to infrared range. The spacecraft will collect up to 2 kilograms (4 pounds) of samples, placing them into an ascending craft that will rendezvous with the orbiter and transfer the samples to the re-entry capsule. The orbiter will return the capsule to Earth.

The Chang’e-5 lander is set to land in the Rümker region in northern Oceanus Procellarum (41-45° N, 49-69° W). The Rümker region remains unexplored by robotic or human landing missions carried out earlier by the United States (Surveyor, Apollo) and the Soviet Union (Luna), and no samples have ever been returned from this broad area. The region includes the Procellarum KREEP Terrane, a prominent geochemically anomalous area on the Moon. It is characterized by high concentrations of radiogenic heat-producing elements (such as thorium, uranium, and potassium) in a thin crust. It has also had much more recent volcanic activity than most of the rest of the Moon, the end of a long, complex geologic history. It may include some of the youngest material on the Moon. (For the Moon, “young” means younger than 3 billion years old.)

Loren Roberts for The Planetary Society, after Phil Stooke

One of the youngest mare units on the Moon occurs in the Rümker region. The high-titanium basalts are known to be younger than any existing lunar samples, including the youngest lunar meteorites, which are 2.8 billion years old.

These young mare basalt units are a top priority for future lunar exploration. Analysis of these samples in laboratories on Earth will provide exact radiometric dates for some of the Moon’s last volcanic events, identifying their age for the first time and improving our understanding of lunar chronology. They will help us understand the nature of the deep source regions that produced the lavas that poured out on the lunar surface. They will permit us to study how radioactive Procellarum KREEP materials played a role in the generation of late-stage mare volcanism, and they will improve our understanding of how the Moon lost its heat over time.

Currently, the only way scientists can determine the ages of these young basalt lava flows is to count craters superposed on top of them. Younger materials have had less time to accumulate impact craters, so they contain fewer craters per unit area. But this is not a precise age-dating method. Returning samples from these young basalts would provide a number for the age of the volcanism.

The Moon is the only cratered terrestrial world from which we have returned samples. Lunar geologists have matched cratering chronology with absolute ages measured from returned lunar samples, building a bridge between crater chronology and absolute ages. The chronology of the rest of the solar system is pinned to lunar chronology. So, Chang’e-5’s success will not only teach us more about the Moon; it will also assist in our understanding of the geological evolution of planetary bodies throughout the solar system. 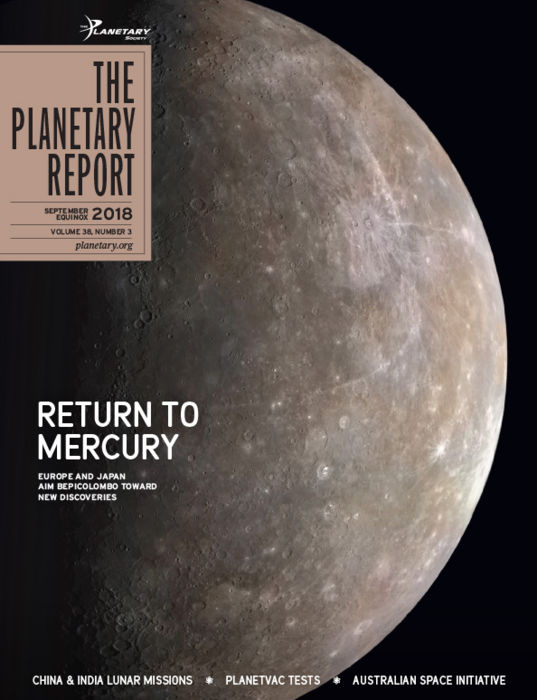 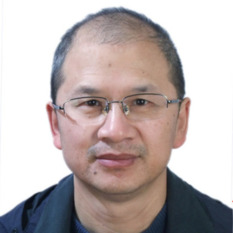 Thank you for the story on these upcoming ambitious missions! Best wishes for a successful mission and science analysis.