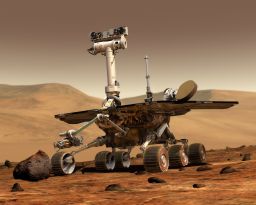 After taking a “direct hit” from one of Mars’ notorious dust storms last weekend, Spirit phoned home today at 11 a.m. Pacific Standard Time, exactly like its ground team had asked it to do and members of the rover team at the Jet Propulsion Laboratory (JPL) cheered. “She's talking!"

“It was a good day on Mars today,” said Steve Squyres, principal investigator for rover science, during an interview from JPL late this afternoon.

The dust storm hit the already power-challenged Mars Exploration Rover (MER) hard, causing it to suffer a life-threatening drop in energy not long after it began moving again for the first time in some eight months.

“It was real scary,” admitted Squyres. Scary because if Spirit shut down because of low power and drained its main power batteries, it might not wake up.

The MER team found out about the dust storm Saturday morning from the team working with the Mars Color Imager (MARCI), which is onboard the Mars Reconnaissance Orbiter (MRO). Since dust storms come with the onset of spring in Mars’ southern hemisphere, it was not exactly unexpected. Such storms have sideswiped Spirit before, particularly during the global storm of 2007, but this one “just hit head on and the power plummeted,” Squyres said.

"This was a very serious storm,” Squyres continued. “The really scary thing about it was that we were not able to predict how bad the conditions would be. We had to assume the worst, but the thing is we didn't know was how much dust was in the atmosphere or how much dust was on the solar arrays.”

What they did know for sure was that Spirit -- which only recently emerged from its third long, brutally cold Martian winter – has been sporting a really thick coating of dust on its solar panels, so thick that the rover all but blends into the Martian landscape.

The MER crew “scrambled” a team last Saturday afternoon (November 8) to uplink some high priority commands to Spirit instructing it to conserve power in an effort to avoid draining the main batteries.

By Sunday (November 9), however, the dust in the atmosphere -- combined with the dust on the rover’s solar panels -- caused Spirit’s power levels to plunge from around 215 watt-hours to the lowest level experienced on the mission to date, a paltry 89 watt-hours or about one-tenth the power it produced just after landing in January 2004. “One way we conserve power is by telling the vehicle to communicate with us less and, of course, that gives us less information,” Squyres noted. 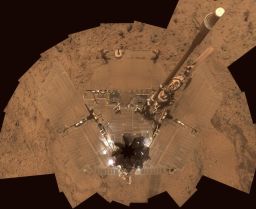 Dusty deck
Spirit's deck is so dusty that the rover blends into the Martian landscape in this image assembled from frames it took with the Pancam from Sol 1355 through Sol 1358 (Oct. 26-29, 2007). Dust on the solar panels reduces the amount of sunlight able to penetrate the arrays and thus reduces the amount of electrical power the rover can generate each sol. The vertical projection used here produces the best view of the rover deck, though it somewhat distorts the ground and antennas. The eight-pointed star shape near the front of the rover (bottom of image) marks the location of the camera mast, which is out of view of the Pancam atop the mast. This mosaic, in approximate true color, is a composite of frames taken through the Pancam's filters centered on wavelengths of 600, 530, and 480 nanometers.
Credit: NASA / JPL-Caltech / Cornell

Rover engineers subsequently sent a command to Spirit asking it to try and communicate today.

The MER team heard nothing from Spirit for a period of three days. “There were two interpretations of that. One was that the vehicle was doing exactly what we told it to do, operating under master sequence control, conserving power, and would call us when we asked it to,” said Squyres. “The other possibility was that the power situation had gotten so bad the vehicle couldn't talk to us. And we didn't really know which it was.”

For those who thought the worst -- that the power stayed around 89 watt-hours, then the most likely interpretation was that the vehicle couldn't talk to them. “But what was really happening on Mars – we now know -- is that [storm] conditions were improving and the power increased steadily over that period of three sols,” said Squyres.

If Spirit’s power levels had not improved, but instead stayed at 89 watt-hours, the rover would have gone into a low power fault mode, “no question about that,” Squyres said. To the rover’s good fortune, the dust storm passed quickly through the area in Gusev Crater around Home Plate, the circular volcanic formation on which Spirit is currently parked. “It hit us quickly, then it started to clear pretty quickly,” he said. And today, right on schedule, the rover responded, communicating via the Mars Odyssey as it usually does.

"This means Spirit has not gone into a fault condition and is still being controlled by sequences we send from the ground," said JPL’s John Callas, MER project manager.

The communication confirmed that the rover had received commands sent on Tuesday for it to phone home today and that the battery charge had not fallen low enough to trigger a pre-programmed fault mode. "The baby is crying, which means it is healthy enough to communicate normally," Callas said "Now we are analyzing the data we've received to determine what the next commands should be, but this is all good news."

In order to give the vehicle enough power to survive the storm, however, another one of the things they did was turn off the survival heater for the miniature thermal emission spectrometer (Mini-TES). “The instrument has a heater that keeps it warm enough to survive during the very cold temperatures at night and that chews up a lot of power, so we disabled that heater in order to not go into the low power fault mode,” Squyres explained.

Keeping the Mini-TES heater operating was a prime objective during the recent Martian winter, because science team members are anxious to use the highly sensitive, mineral seeking instrument to locate more near pure silica, which Spirit found last year and which is one of the most significant discoveries of the MER mission. 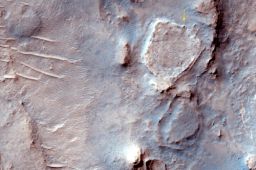 Spirit at Home
This image shows Spirit at its current location on the northern edge of Home Plate in the Columbia Hills,at Gusev Crater. The picture was taken during the southern hemisphere winter solstice at about 2 p.m. local time on the rover's Sol 1591 (June 24, 2008). Home Plate is the elevated round and light toned mesa on the right side of the image. Spirit is visible as the large dark "bump" on the north-northeast edge of the circular volcanic formation. Mid-winter on Mars is the time of the clearest, least dusty atmosphere.
Credit: NASA / JPL / University of Arizona

They managed to keep Mini-TES warm through the worst of the Martian winter. But if the rover had gone into low power fault mode, it would have turned off the heater anyway. “Turning off the heater was the right thing to do,” said Squyres.

“I will point out that every time we DeepSleep on Opportunity, the Mini-TES heater is taken offline and we have done that many hundreds of time on that rover and that Mini-TES still works,” said Squyres, [although the optics are obscured with dust from the global storm of 2007].

“I offered to bet Phil Christensen – [the Arizona State University geophysicist who designed the instrument] -- a beer that Mini-TES would survive this and he wouldn't take the bet,” added Squyres. Which may well mean that they both expect it will work once they fire it back up. Whether it is likely to or not is something they'll be looking into in coming sols.

Today, Spirit was a little more energetic, with power levels hovering around 161 watt-hours, though clearly it will be a while yet before it’s back in the saddle. With the storms come wind gusts as well as the fine, reddish-brown powdery dust so it is possible that some of the thick coating of dust was lifted during the storm, but that remains to be seen. “We don't think there was a big change one way or another,” said Squyres, “but we don’t really know.”

Over the next four sols, Spirit’s crew will be monitoring the tau or amount of dust in the atmosphere, performing health checks on Mini-TES, and conserving battery power.

The regular MER Update will appear, as it always does, at the end of the month.