Testing the lunar module above Earth

Apollo 9 was the first flight test of the lunar module, the spider-like lander that would carry astronauts to the surface of the Moon. On 3 March 1969, a Saturn V rocket a lunar module, service module, and command module carrying astronauts James McDivitt, David Scott, and Russell Schweickart. In Earth orbit, the crew completed a simulated lunar surface descent, a long-distance rendezvous with the lunar module, and a spacewalk in the newly designed Apollo spacesuits. 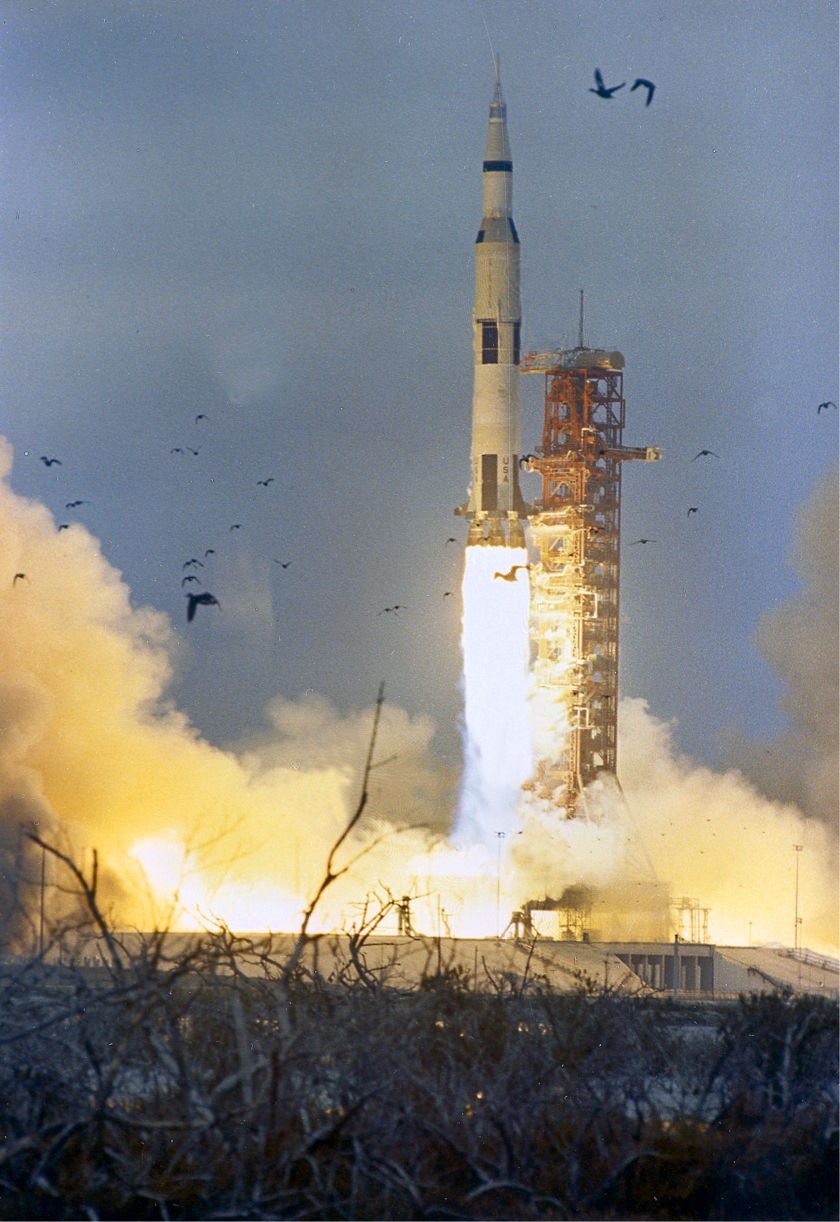 After detaching from the Saturn V upper stage inside the command module with its attached service module, the astronauts turned around to dock nose-first with the lunar module. Four hours after launch, the three-vehicle stack popped loose from the upper stage, kicking off 10 days of systems checkouts above Earth.

After a series of service module engine burns to test loads on the combined vehicles, the crew conducted an EVA. Schweickart stepped out on the lunar module porch, which astronauts would use to exit on the lunar surface, while Scott observed from outside the command module. 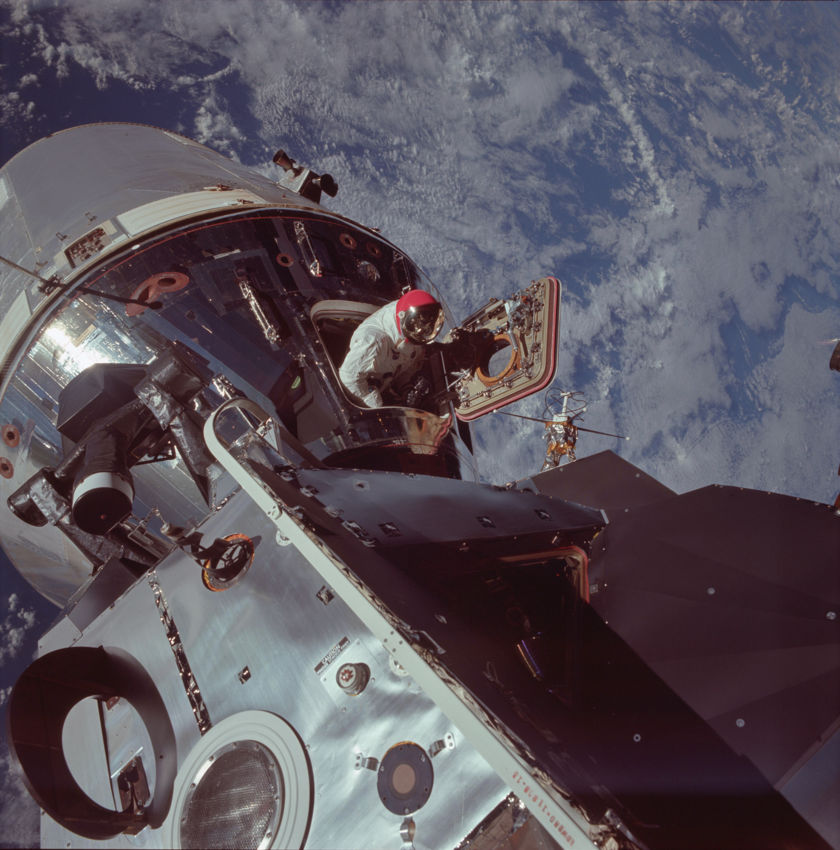 Dave Scott conducts an EVA from the Apollo 9 Command Module, while Rusty Schweickart photographs him from the Lunar Module's porch.

On 7 March, McDivitt and Schweickart undocked inside the lunar module and fired its descent engine twice, flying to an orbit 20 kilometers higher than that of the command and service modules, where Scott remained. They jettisoned the lunar module’s descent stage and fired its ascent stage engine, marking the first time the engine was used in space. They navigated the ascent stage back to a rendezvous with the command and service modules, simulating a return from the lunar surface. 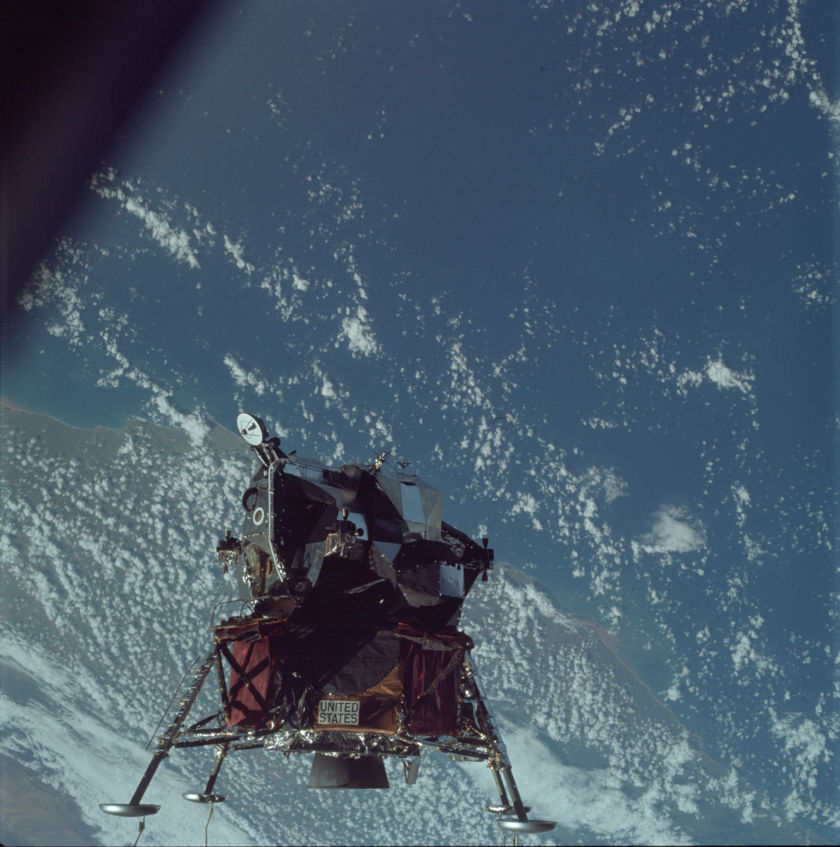 During Apollo 9, astronauts James McDivitt and Rusty Schweickart took the lunar module for a shakedown cruise in Earth orbit, while Dave Scott remained behind in the command and service modules.

Having completed all their primary objectives successfully, the crew returned to Earth on 13 March, splashing down east of the Bahamas in the Atlantic Ocean. The mission paved the way for Apollo 10 in May 1969, which would send a crew to lunar orbit for a final landing rehearsal ahead of Apollo 11.

NASA estimated the following direct costs for Apollo 9. Full costs of the Apollo program can be found on the "How Much Did the Apollo Program Cost?" page.

"I hope I didn't forget anything on board it."

—Rusty Schweickart, after Apollo 9 undocked from the lunar module for the final time

18 May 1969
Dress rehearsal for the Moon landing 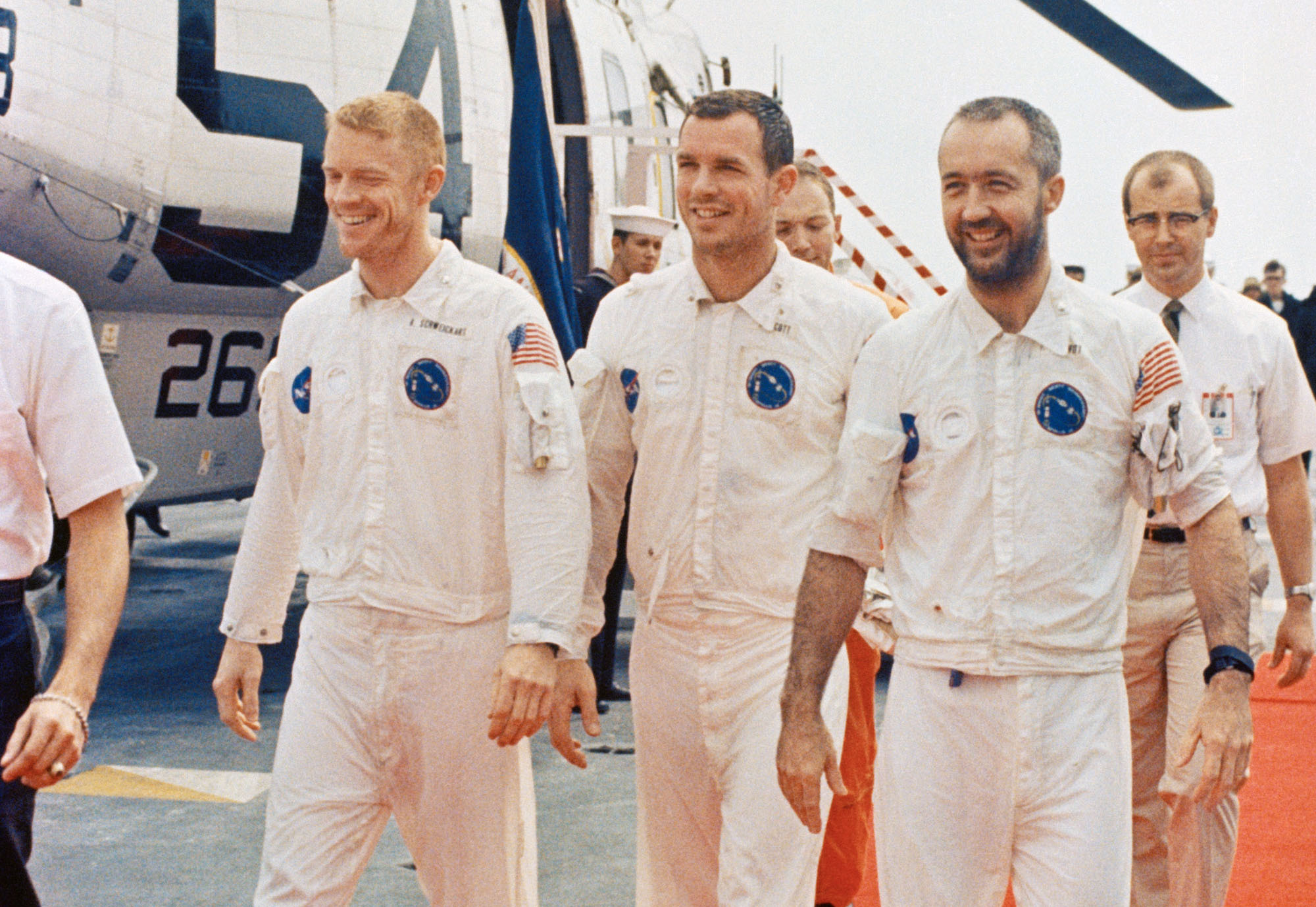