We are revving up the EarthDial Project again to celebrate the success of the Mars rovers Spirit, Opportunity, and Curiosity, and to get people all over the world to learn more about astronomy, the scientific method, and our place among the stars— our place in space. There is so much to learn from the shadows of small upright posts. You can find instructions here: build your own EarthDial
We set up the EarthDial program originally back in 2004. It’s based on the calibration targets for the rover cameras— what we call the MarsDials. These are sundials on Mars. While they’re casting shadows for the cameras, we can use them to reckon a version of solar time out there. Then with the EarthDial project on Earth, we not only reckon the local time of many places on our world and put images on the worldwide web. We also can learn a great deal more about our planet by observing the motion of the Sun across terrestrial skies.
Our home-planet EarthDials share a basic design that is visually and horologically reminiscent of the MarsDials aboard the rovers. The first two arrived on Mars in January 2004; the third arrived eight years later in August 2012. The first MarsDials bore the motto "Two Worlds - One Sun," reminding us that it's the same star that traces paths across the skies of Earth and Mars. The third MarsDial aboard Curiosity proclaims: “To Mars – To Explore.,” a tribute to adventure and discovery. Back here on Earth, the first EarthDial of 2013 carries the motto, “ To Know Worlds.” We hope you’ll use it, as well, expressed in your native language.
The Sun's apparent motion is different for observers on different parts of Earth or Mars. So, the lines and curves on the faces of the EarthDials must differ from Spitsbergen to Seattle to San Diego to Soweto to Saigon to Sydney.
You can access instructions on how to build your own EarthDial for your own location and learn about the motion of the Sun across your sky as you watch the continued adventures of Opportunity, and Curiosity. Although the Spirit rover stopped working after seven great years on Mars, we’re confident that her MarsDial is still casting a shadow. Perhaps one of you reading this right now will visit her someday.
By observing the motion of sundial shadows around the world at the same time by means of the this web page, an observer can get insight into the nature of planetary motion and our place in the solar system. Although every EarthDial is mathematically unique to its location on planet Earth, we hope that each one will be made with a common pattern in mind and that each one will be decorated in the local language with cultural motifs of its host: to know worlds.

Below, you can see a live shot of the EarthDial at The Planetary Society headquarters in Pasadena, California, USA. 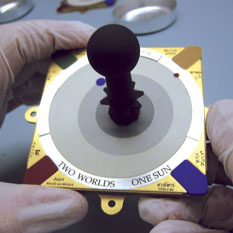 How to Read a Sundial

Full instructions on how to construct an EarthDial.

The EarthDial Calculator will calculate all of the angles and distances that you need to construct the lines on your EarthDial.

Definitions of a few terms commonly used with sundials.