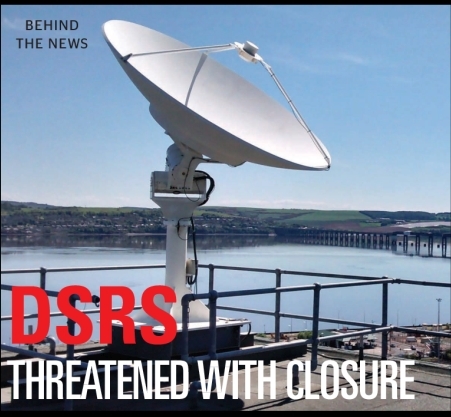 I, along with a few others here in the UK, are trying in a very short space of time to raise capital to show the University of Dundee, Scotland that there is practical, alternative funding and future for the DSRS facility in its' 50th Year of service and its' 40 years of archived satellite data / imagery. Is this useful for Climate Change Research? It's Funding Grant was not renewed by the UK, Natural Environment Research Council (NERC). If we achieve funding for the short / intermediate term it allows time for securing long term funding. The Alert came from the article in the June Issue, BIS Spaceflight magazine which can read via the link to the crowd funding webpage mentioned later. Support action has to move at a fast pace as the latest information indicates June being the start of the dismantling of the Station by the University. We can stop it if enough publicity occurs and Crowd Funding comes in. See the webpage, set up on 6th May, to show alternative funding is being sought to help run DSRS while other funding is found, it just needs the opportunity of time to allow it to be organised! Support DSRS by visiting Crowd Funding webpage.

Numbers do count and half the initial monthly requirement has already been met after just 10 days. N.B there is the chance to win a VIP Ticket to meet Buzz Aldrin and other Apollo Astronauts at the 'Road to Apollo 11: 50th Anniversary Moon Landing Event on Saturday 13th July, Simi Valley California. The Winning Donator will be chosen on the 12th June, 2019.