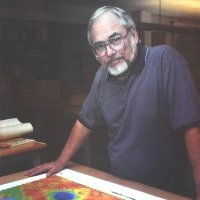 As an avid science fiction reader in high school, I bemoaned the fact that I was too late for discoveries on new lands on Earth and too early for discovery on the planets. Then came President Kennedy’s goal to place men on the Moon. The space age was suddenly here.

In 1969 I was a 29-year-old Assistant Professor at Northwestern State University of Louisiana. At that time, I had completed coursework for my Ph.D.—and lacked only the defense of my dissertation and certification in a second foreign language. My dissertation subject was the Geology of the Agrippa Region of the Moon, which included geologic mapping of an ACIC 1:500,000 scale quadrangle not far west of the Apollo landing site. Interpretation of geology of the region included study of earth-based imaging, limited Ranger imaging, and Lunar Orbiter imaging. The mapping and writing were essentially complete.

Needless-to-say, the Apollo landing near my research area was of more than passing interest. I had interned at the Johnson Space Center in 1966 as a graduate student. I was familiar with the geologic training provided to the astronauts, and I had a fair knowledge of engineering requirements of the mission.

On July 20, I made sure my one-year old son André was propped in front of the 15-inch television set to observe the historic event. I watched every replay and flipped through channels (all three of them) searching for the best science discussion at the moment. In the following days and weeks, with no Internet, I eagerly sought out contacts within NASA, the U.S. Geological Survey, and news media to obtain images. I awaited the special edition of Science dedicated to the landing.

One year later, with German certified as my second foreign language and a successful defense of the dissertation, I received my PhD from Texas Technological University at Lubbock. As a fresh Ph.D. I participated in the 1970 Impact Vs. Volcanism Conference in Houston. I wrote grants that would lead to NASA funding for Lunar mare studies and Geologic mapping on Mars, Mercury, and Ganymede.

Over the years, I have met my share of Lunar Landing conspiracy buffs. Some believe that the lunar landings were faked, others believe that we saw evidence of aliens’ bases on the moon. I carefully explain to them that for the conspiracy to work, thousands of scientists would either be duped or “in on” the conspiracy, and not one would have broken the code of silence in all these years.

Maybe I didn’t walk on the Moon or throw rocks in the “canals of Mars”, but I have enjoyed being part 50 years of planetary exploration.

Dr. De Hon is a Charter member of the Planetary Society.