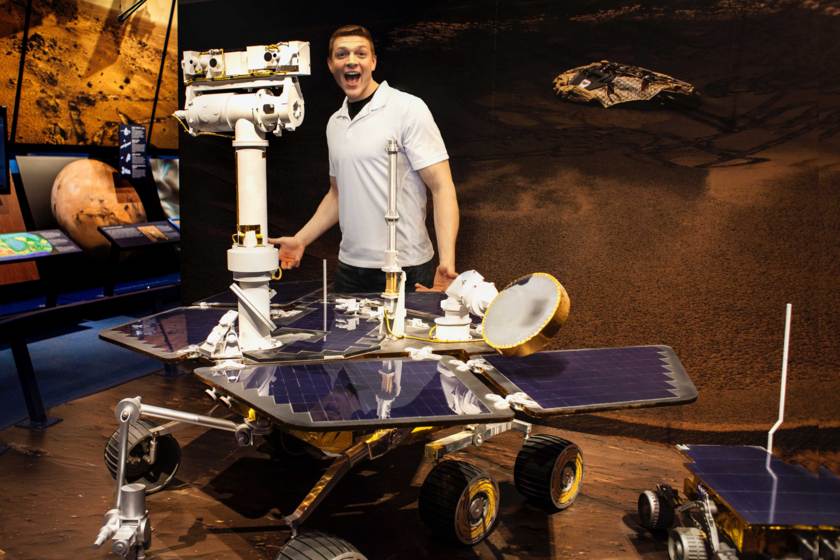 Kevin J. DeBruin saw the movie October Sky as a 10 year-old boy and knew he wanted to design spaceships when he grew up. He faced rejection all along the way, but he never gave up.

Kevin grew up in Kaukauna, WI, a small town of just south of Green Bay. Kevin struggled with math in middle school, but he dedicated extra time outside of class to ensure he learned the material. Kevin played multiple sports ever since he was a child, but in high school he focused solely on soccer where he was the team captain and goalkeeper for Kaukauna High School leading his team to the State playoffs his Junior year. He demonstrated quality leadership skills early on and that is also seen in him being an Eagle Scout! His Eagle Scout project was building a 30-foot brick patio walkway to a 30-foot diameter brick patio with a fire-pit in the center for a handicapped hunting facility known as Joe's Lodge in Black Creek, WI.

In high school Kevin took summer school math courses, as well as college accredited English and Spanish courses, to get ahead academically. He graduated 17th out of 315 in his class and went on to do his undergraduate studies at the University of Wisconsin-Platteville. He did not play sports in college, but focused on his studies where he obtained his Bachelors in Mechanical Engineering in December of 2013.

Kevin worked at Woodward, Inc. in Rockford, IL over the summers as an intern aiding in the design of fuel controls for jet turbine engines. He spent time in multiple departments: technology development, product development, and production engineering. Kevin found tech-dev to be his favorite and requested to be placed in that department for his fourth internship thinking that Woodward may be his post-undergraduate career. During this time though he continuously applied to the various NASA centers in hopes of an internship so that he may make another step towards his dream of one day designing spaceships.

It took Kevin three years and over 150 applications to NASA before he received his first internship with NASA Langley Research Center (LaRC) in Virginia in 2012. Before that, he held one phone interview with NASA Glenn Research Center in Ohio, but unfortunately did not receive the internship. Otherwise he received no responses from his online applications, follow-up emails, and even letters he sent in the mail. While at NASA LaRC he decided he needed a Master’s Degree to do what he wanted to do. So he set his sights on Georgia Tech, and only Georgia Tech.

Georgia Tech initially denied his application to graduate school stating his 3.5/4.0 GPA was on the low end of admitted applicants and that there were no funding vacancies for him. Kevin engaged in an email conversation with the Dean of Admissions right away. He sought feedback on where to improve and how to gain acceptance for the following semester. Over two weeks for every one email the Dean of Admissions sent, Kevin sent two emails. The Dean of Admissions, witnessing Kevin’s passion and perseverance, called Kevin on a Friday afternoon and said that he had “opened up a spot” for him for the current semester, but that it would come with no funding. Kevin gladly accepted and prepared to ask his parents to take out a second mortgage on their house for the cost of tuition and to trust him.

Kevin did not stop there with Georgia Tech though. He desired funding. He reached out to all the professors even though he was told none would be available. No more than two weeks later, Kevin received a Graduate Research Assistantship (GRA) after a Sunday evening phone interview with his soon-to-be advisor. This means they paid his full tuition and even gave him a monetary stipend for doing research. A heck of a turnaround from being initially rejected from the school!

While at Georgia Tech Kevin set his sights on NASA JPL, and only NASA JPL. In his final semester at Georgia Tech he applied and passed the first two rounds of interviews: a resume review and then an on-campus at Georgia Tech interview. Then in December 2014, he flew out to Pasadena, California for the third round of interviews. About 1.5 months after his on-site interview at NASA JPL, they informed him that they did not believe he had sufficient experience needed for the job at-hand.

Being rejected did not stop Kevin. He took a chance, a huge risk, he graduated with his Masters in Aerospace Engineering without a job and acquired a 10-week internship with NASA JPL. His goal was to prove to them in 10 weeks that they could not survive without him. If not, he would be moving back to Kaukauna to live with his parents and figure out his next move. Kevin worked harder than he ever did before. He figured out who had the ability to hire and started to set up interviews for himself. Altogether Kevin had approximately 30 conversations attempting to get himself hired in the last three weeks of the internship. And in the last few days of his internship KEVIN WAS SUCCESSFUL! A dream dreamt 16 years ago had finally become a reality.

Now Kevin currently works as a Systems Engineer at NASA's JPL in Pasadena, CA in Project Formulation working on some of the most advanced NASA mission concepts. Kevin spends his free time promoting space exploration where he writes to students, presents to children, and gives guided tours of NASA.