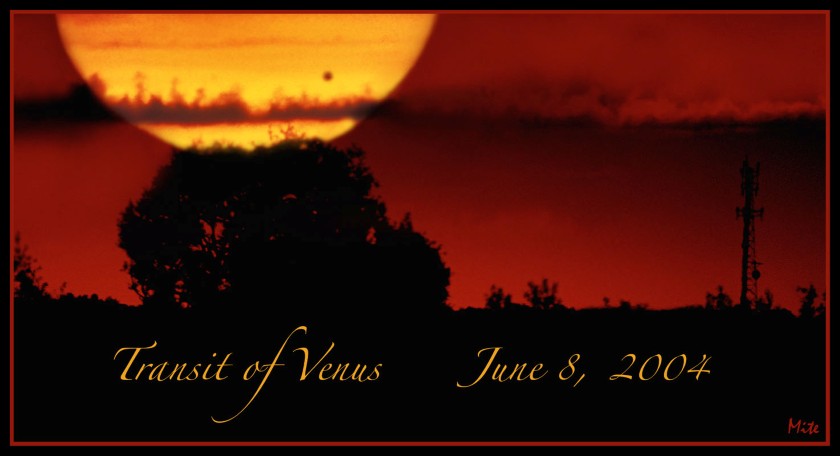 The transit of Venus is an interesting but rare event that occurs when Venus passes between the Sun and the Earth, obscuring a very small portion of the Sun. Venus then appears as a small black disk slowly moving across the face of the Sun. Transits of Venus take place following a 243 years cycle, with pairs of transits 8 years apart separated by longer intervals of approximately 121.5 and 105.5 years. Before 2004, the last transit was in December 1882 and the next one after 2012 will be in December 2117.

I was fortunate enough to photograph this astronomical phenomena on June 8, 2004. The entire transit lasted about six hours. From where I live, near Quebec city, the transit was well under way at sunrise, but I managed to see it for a few hours until the end when Venus passed across the edge of the sun. I am now looking forward to another transit of Venus in June this year, the last one until December 2117. Observers in North America will be able to see this next transit in the evening on June 5, 2012, through sunset. For those interested, plan a location with a clear western horizon. As with a solar eclipse, eye protection is mandatory. Safe ways to watch Venus transit the sun include rear projection screens and approved solar filters.

Here is some technical info about the picture I submitted:

Photo is a composite of two slides of the same scene taken consecutively at different settings, f22 1/1000 for the sun with Venus in front (the small black dot) and f 5.6 1/250 for the background. No filter was used. Slides were scanned with a Nikon Super Coolscan 4000 ED film scanner and both images were combined in Photoshop after contrast and brightness adjustment. Final image was cropped, resized and framed.