The Transit of Venus 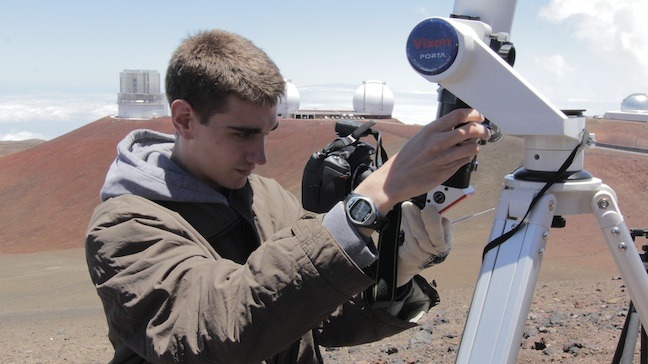 My Return to the Sun When I arrived to the Mauna Kea visitor center at nine thousand feet elevation, just after dark, I was surprised to find a dozen vehicles, shuttles, tour buses, and some fifty people wrapped in blankets, winter jackets and caps, huddled around a dozen telescopes focused on Mars, Saturn, and several nebulae. I learned the Mauna Kea Visitors Center holds a public star party, a viewing session every night of the year, weather permitting. My heart lifted and I was a kid again, eager to interact, share, and learn. I changed from shorts into long pants and added layers in the back of my friend Vitus’ truck. I grabbed my camera and tripod and walked down the side of the road and across the parking lot. I felt like the last guy to arrive to the party, a bit late, but excited to see who was present. Children, their parents, lone travelers and couples, people of all ages and walks of life. The guides were part- and full-time employees of the National Park, some working three days on, four days off at this incredible site. They were patient, knowledgeable, and intent upon providing a positive experience for all who were present. I was impressed, for hosting a star party every night of the year is analogous to teaching the same class over and over again without opportunity to advance to the next level for none of the students will return the next day. The reward, of course, is the expression on someone’s face who sees the rings of Saturn for the first time, and learning from those who are experts in the field.

While the light of the moon saturated the night sky, Mars and Saturn provided an elegant show, rich in color and image quality. At 10 PM, when the scopes were put away, a half dozen vehicles remained. People like me would spend the night wrapped in a blanket or sleeping bag in order to guarantee a means to the top the next morning. The next morning the sun rose and it was vibrant.

At 6 AM I walked to the top of the wind whipped ridge just West of the Visitors Center. I captured the shadow of Mauna Kea as it moved over the valley floor toward the sea. I could clearly see the summit of Mauna Loa where I had experienced the total solar eclipse in 1991. That was twenty one years ago, but at that moment it felt like yesterday. I recall parts of the three days backpack, just a dozen of fifty who gained permits made it to the top. In the end, of the thousands who came to Hawaii for that event, it was only the amateurs on Mauna Loa and the professionals here on Mauna Kea that witnessed the eclipse for the entire island was covered in a heavy cloud bank just two hours before the transit of the moon across the face of the sun began. I recall how the moon’s shadow raced across the top of the clouds and the steaming caldera of Mauna Loa. The few birds at this elevation settled down for what they assumed was the night. The air grew cold, quickly. I recall the sensation of that day perfectly, knowing I was in the right place at the right time, and the next forty five minutes impetus for the summer on the island doing biology research with ASU and Stanford University.

Without a digital camera, it would be another month before I knew if I had captured the event on film. Just two rolls dedicated to the eclipse, I bracketed carefully and in the end, the images I captured on my Nikon FE2 with an 80-200 lens were my reward. There is an energy to astronomy, the oldest of sciences and perhaps the most gratifying, as it brings people of all ages together. I was reminded of last summer at David Levy’s Adirondack Astronomy Retreat, seeing again that astronomers are generous with their time, experience, and gear. They find as much joy in sharing of themselves with the next generation as they do making their own, personal new discoveries.

This morning, I realized I was given a second chance at such an incredible event, but this time from the other side of the valley in the shadow of the world’s most famous observatories. Amateur enthusiasts came from Germany, France, Canada and across the U.S. Some arrived at 5 while others at 8, 10, and into the early afternoon to watch the transit of Venus across the face of the sun. We all shared in our braving temperatures in the low thirties with winds gusting up to 50 MPH. The wind chill presented a harsh dichotomy to this otherwise tropical island. As I traveled light to the Big Island, I had only my Canon 60D, a macro and 18-135 lens. I came across Carl R. who was kind enough to allow me to borrow his 400mm lens in exchange for the images it produced on my DSLR body with relatively stable tripod (compared to his). He sat by me for more than an hour as I shot stills and video, describing his own personal history with amateur astronomy.

As with nearly everyone who looks up and asks how, when, or why, there is a parent or grand parent, or in the case of Christina a great, great, great, great grandfather who had observed the last transit of Venus in 1882. She ventured to the Big Island in order to carry on her grandfather’s tradition, even after a four generation gap. Eric and his mother spent the entire day on top, applying sun screen, eating from their cooler and enjoying conversation. Eric took more than 500 photos through his scope with a Nikon DSLR attached. This was a very big deal, literally a once in a lifetime event as the next transit will not occur until 2117 and then again in 2125. While some two hundred people came up and went down along the winding road by shuttle, two dozen of us remained in the intensity of the cold air and bold sun for the duration, more than eight hours at nearly fourteen thousand feet. If given the chance to observe a solar or lunar eclipse or any major astronomical event in the presence of skilled amateurs or professionals, I highly encourage you to do so. Introduce your children to this magical, gratifying science or re-introduce yourself to the joy of being a kid and seeing something spell binding for the first time.