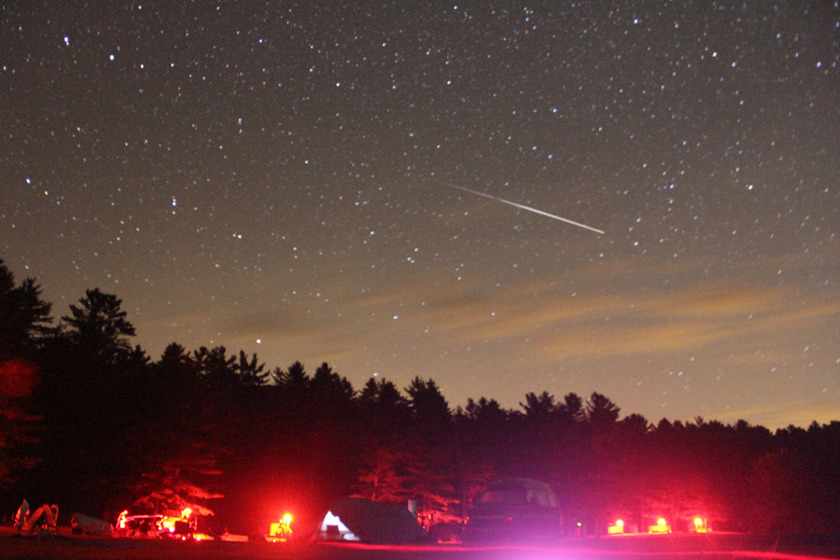 (This story was originally published in the Northern Colorado Business Report, September 2011) When I was in my final year of high school and first two years of college I presided over the Phoenix Astronomical Society. In those years I was privileged to meet Eugene Shoemaker and David Levy, co-discoverers of the Shoemaker-Levy comet, which later plunged into the atmosphere of Jupiter. Now, more than twenty years later, Gene has passed away, his ashes scattered on the surface of the moon, while David and I had long ago lost contact.

This summer, I dove headfirst into a documentary film project about astronomers and astrophysicists. My desire was to capture their motivation to ask where did we come from, and why? A passion for knowledge expressed through looking up. The second day of August I joined David, his wife Wendee, and three dozen amateur astronomers at the annual Adirondack Astronomy Retreat, hosted by SUNY in the mountains of upstate New York. It was a long overdue reunion with David and a wonderful learning experience for me, having been away from amateur astronomy for far too long.

In the process of working on my film and my return to astronomy, I came to appreciate two aspects which are both compelling and complimentary to each other. Astronomy, more than any other science, offers an accessible, functional bridge between amateurs and professionals, a gateway for the next generation to be compelled to learn. Amateur astronomy enables anyone with some experience, patience, and a little luck to happen upon an event in the night sky which aids the professional community. While professional astronomers have at their disposal more advanced telescopes, the amount of time they have with them is limited by a long cue of researchers around the world.

Furthermore, professional astronomers and professors often visit local astronomy club meetings to share their latest findings. Young astronomers, as I once was, are inspired by direct interaction with professional scientists.

The sheer number of amateur astronomers world-wide is astounding, literally thousands of scopes peering into the sky every night. This makes for a world-wide network of data collection devices, some manually operated, some automated through computer driven tracking systems. What’s more, the opportunity for a budding astronomer to capture his or her first photograph of a colorful nebulae or the bands and moons of Jupiter is literally at their fingertips.

In the years I have been away from astronomy, the industry has changed. Certainly, motor drives and tracking systems were in use, but we found our way around the night sky using handheld maps, large, many-page star charts printed in black and white. Now, micro-computers, stepper motors, and laptops attached by USB cables enable anyone with curiosity to engage in the oldest science of humankind.

As with the discussion around GPS versus topographical maps, one can argue that to know only how to use GPS units in the wilderness is a tremendous risk, for the batteries may die, or the lost in a creek. With aviation too, pilots are trained in the original, non-electronic means of navigation before working with on-board GPS and radar guidance. There is part of me that says the same should be true with astronomy, learn it the hard way so that it becomes ingrained and a part of you.

But when I consider the excitement of a child viewing the rings of Saturn for the first time, their mouth and eyes open wide, “Wow! Did you see that? Come look!” There is no right or wrong way to open the door to a lifelong passion for learning. If in our instant gratification world a child can be turned on to the sciences, then by any means possible, point, click, and be thrilled. If they stick with it long enough, they will eventually know their way around the night sky and be able to tell their friends, “Right there, see that fuzzy thing? It’s a galaxy that if we could see it with our naked eye would be six times larger than the moon!”

While I am now just a bit over forty, I was a kid again for those three nights, staying awake ’till 4:30 AM, barely making it to breakfast hours after dawn. I was the recipient of patient assistance for astronomers are a generous lot, each generation offering something to the next. I spent an entire night taking my first photographs of Jupiter and M27, the Dumbbell nebulae, my new Canon 60D DSLR attached directly to a 13” Meade scope. Ah! The clarity, the color—it was amazing! Even without assistance, someone new to astronomy can attach a USB cable to a relatively inexpensive telescope, train it on the North Star, and see on-screen a map of what lies overhead while the scope automagically moves to any object chosen by the mouse.

Photographs can be logged, archived, and correlated to the map, an interactive show-n-tell. With astronomy, every night is an adventure, an exploration of some one hundred billion stars, nebulae, and gaseous birthing chambers for the next generation of solar engines, pulsars, super novae, and black holes. The mind has no choice but to open when one looks through a telescope, to look up and ask, “Why?”