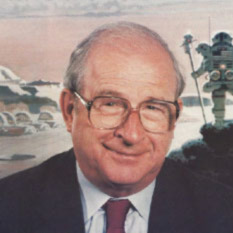 Former Member of the Board of Directors

Thomas Otten Paine (November 9, 1921 – May 4, 1992), a scientist and advocate of space exploration, was the third Administrator of NASA, serving from March 21, 1969 to September 15, 1970. During his administration at NASA, the first seven Apollo manned missions were flown, including the first ever manned lunar landing by Apollo 11. Paine was also deeply involved in preparing plans for the post-Apollo era at NASA.

Born in Berkeley, California, Paine attended public schools in various cities and graduated from Brown University in 1942 with an A.B. degree in engineering. In World War II, he served as a submarine officer in the Pacific and in the subsequent Japanese occupation. He qualified as a Navy deep-sea diver and was awarded the Commendation Medal and Submarine Combat Insignia with stars. From 1946-49, Paine attended Stanford University, receiving an M.S. degree in 1947 and Ph.D. in physical metallurgy. During his career, Paine received honorary doctor of science degrees from Brown, Clarkson College of Technology, Nebraska Wesleyan University, the University of New Brunswick, Oklahoma City University, and an honorary doctor of engineering degree from Worcester Polytechnic Institute.

Paine began his career as a research associate at Stanford University from 1947 to 1949, where he made basic studies of high-temperature alloys and liquid metals in support of naval nuclear reactor programs. He joined the General Electric Research Laboratory in Schenectady, New York, in 1949 as a research associate, where he started research programs on magnetic and composite materials. In 1951, Paine transferred to the Meter and Instrument Department of G.E. in Lynn, Massachusetts, as the manager of materials development, and later as a laboratory manager. Under Dr. Paine's management, this lab received the Award for Outstanding Contribution to Industrial Science in 1956 from the American Association for the Advancement of Science for its work in fine-particle magnet development. From 1958 through 1962, Dr. Paine was a research associate and manager of Engineering Applications at the Research and Development Center of the General Electric Company in Schenectady, New York. From 1963 to 1968, Paine was manager of TEMPO, the Center for Advanced Studies of General Electric located in Santa Barbara, California.

Dr. Paine was recruited to succeed Mr. Webb by President Lyndon Johnson. He was tasked with the responsibility of getting the Apollo program back on track in the wake of the Apollo 1 disaster, and fulfilling President Kennedy's goal of, "before this decade is out, of landing a man on the Moon and returning him safely to the Earth."

During his administration at NASA, the first seven Apollo manned missions were flown, highlighted by the first ever manned lunar landing by Apollo 11. In all, 20 astronauts orbited Earth, 14 traveled to the Moon, and twelve walked upon its surface. Many automated scientific and applications spacecraft were also flown in U.S. and cooperative international programs.

Paine was also deeply involved in preparing plans for the post-Apollo era at NASA. Along with George Mueller and others, Paine developed an ambitious plan calling for the establishment of a lunar base and a massive space station in Earth orbit before the end of the 1970s, culminating in a manned mission to Mars as early as 1981. President Richard Nixon rejected these plans, however.

Paine was instrumental in acquiring the Apollo 11 Goodwill Messages, which rest on the lunar surface today. He personally corresponded with world leaders and coordinated the efforts to enshrine the messages on a tiny silicon disc manufactured by the Sprague Electric Company of North Adams, Massachusetts. Paine's name is also etched onto the disc. Paine discussed the idea of the messages with the State Department's U. Alexis Johnson. A high level committee determined that a plaque declaring that "We Came in Peace for all Mankind" and the planting of a U.S. flag on the Moon were to be part of the ceremonial activities for Neil Armstrong and Buzz Aldrin on the lunar surface.

Paine left GE in 1976 to become the President and Chief Operating Officer of Northrop Corporation, where he also served as a Director. Paine retired as President of Northrop in 1982.

Dr. Paine served as a director for many corporations, including the RCA, NBC, Eastern Air Lines, Nike, Arthur D. Little, Inc., Orbital Sciences, and Quotron Systems (a division of the Citicorp company). Paine also served as a Director of The Planetary Society, the National Space Institute, the International Academy of Astronautics, and the Pacific Forum CSIS Honolulu Hawaii.

Paine also has served as a Trustee of Occidental College and Brown University and was a member of the National Academy of Engineering. The Planetary Society honored his commitment to Mars by establishing The Thomas O. Paine Award for the Advancement of Human Exploration of Mars.

Paine died of cancer at his home in Los Angeles, California in May 1992. In 1972, Paine donated his papers to the Library of Congress where they are currently open and available in the Manuscript Division. Although there is one container of classified material, the other 183 are open and available to all researchers.