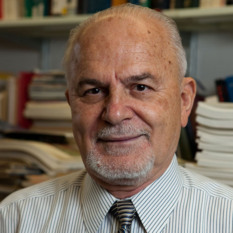 A native of Greece, Thanasis (Tom) Economou has been building instruments for interplanetary spacecraft since the mid-1960s. Currently he is associated with three robotic interplanetary missions: the Mars Exploration Rovers, the Cassini mission to Saturn, and the Rosetta mission to Comet 67P/Churyumov-Gerasimenko. He also participated in the now-complete Stardust mission to Comet Wild-2, and its redirected mission as Stardust-NExT to Comet Tempel 1. Economou also built the Alpha Proton X-ray Spectrometer that successfully performed the first chemical analysis of martian rocks aboard the Mars Pathfinder rover in 1997. Working in the laboratory of Anthony Turkevich, he contributed to the alpha backscattering experiment of three robotic Surveyor space probes that landed on the moon in 1967-68. With Turkevich during the 1970s and 1980s, he also conducted basic nuclear physics research on the subatomic structure of matter using the most advanced particle accelerators at Los Alamos, Argonne and Fermi National Accelerator laboratories. During the 1990s they performed an important double beta decay experiment of Uranium-238 to Plutonium-238, suggesting for the first time that neutrinos consists of a small quantity of mass.