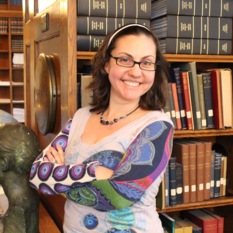 Svetlana "Svet" Shkolyar is a Carnegie Fellow working at the Geophysical Laboratory with Andrew Steele on helping inform biosignature studies on Mars. Svetlana holds a B.S. in Physics, an M.A. in Mass Communication, an M.S. in Space Studies, and a Ph.D. in Geosciences from Arizona State University, with an emphasis in astrobiology. Her research interests focus on biosignature detection using integrated Mars rover-based instrumentation, especially visible and UV Raman and fluorescence spectroscopy. She also studies carbon phases within a wide variety of Mars analog samples, from Arctic sandstones to ancient lakes deposits, as well as actual Martian meteorites, to help inform biosignature searches on Mars and Mars Sample Return efforts. She is also a collaborator on the Mars Science Lab organics detection instrument, SAM (Sample Analysis at Mars).

Photo and biographical information from the Carnegie Institute.

If you are space professional traveling to Thailand, the country's national space science research institute has an opportunity for you!