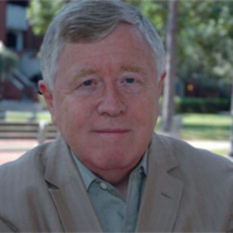 Stanley F. Dermott is a Professor of Astronomy at the University of Florida. His current research focuses on solar system dynamics and the structure of the zodiacal cloud and other debris disks. His contributions to planetary science include a broad range of theoretical papers interpreting recent observations of the solar system, particularly those returned by spacecraft. Work with colleagues on the chaotic dynamics of the Uranian satellites in 1984 predicted that Voyager observations of Miranda may show surface melting. Their analysis of the observed shape of Mimas showed that the icy satellite is centrally condensed. They predicted that some narrow rings may contain embedded small satellites. Dermott and colleagues developed an asteroidal origin of the zodiacal dust bands and used IRAS observations to show that Earth is embedded in a resonant ring of dust and has a cloud of dust permanently in its wake—this was the first paper to demonstrate that the detection of structure in circumstellar disks may indicate the presence of planets.