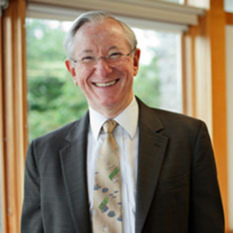 Sean Solomon is the director of Lamont Doherty Earth Observatory, the largest of the Earth Institute’s research centers. Prior to arriving at Columbia, in July 2012, Solomon served for 19 years as Director of the Carnegie Institution’s Department of Terrestrial Magnetism in Washington, D.C., where his research focused on planetary geology and geophysics, seismology, marine geophysics, and geodynamics. From 1972 to 1992, Solomon was a member of the faculty of the Department of Earth, Atmospheric, and Planetary Sciences at the Massachusetts Institute of Technology. He has led or been involved in oceanographic expeditions on Earth as well as spacecraft missions to the Moon, Venus, Mars, and Mercury. From 1996 to 1998, he was president of the American Geophysical Union, the world’s largest organization of Earth and space scientists.

Solomon is the Principal Investigator for NASA’s MESSENGER mission to Mercury, the planet closest to the Sun. The MESSENGER spacecraft was inserted into orbit about Mercury in March 2011 after nearly seven years traveling through the inner solar system and has been continuously mapping the planet’s surface, interior, and environment since shortly after arrival. The mission recently discovered ice at Mercury’s north pole and will continue gathering information key to understanding the planet’s composition, geological and internal evolution, atmosphere, and magnetosphere. From 1998 to 2008, Solomon served on the executive council of the NASA Astrobiology Institute, which seeks to understand how life on Earth arose and its potential to exist elsewhere. Solomon is involved in NASA’s GRAIL mission to the Moon, which launched in 2011 and mapped the Moon’s gravitational field in unprecedented detail until late last year. From 1982 to 2005, he was involved in both the Magellan mission to Venus and the Mars Global Surveyor mission.

Solomon is a member of both the National Academy of Sciences and the American Academy of Arts and Sciences and is the recipient of numerous awards. These include the Geological Society of America’s G. K. Gilbert Award for solving broad problems in planetary geology, and the American Geophysical Union’s Harry H. Hess Medal, given for outstanding research on the evolution of Earth and other planets. In 2011, when he stepped down as a director at Carnegie, colleagues arranged to have a previously discovered asteroid named after Solomon. Asteroid 25137 Seansolomon, about a mile and half wide, is currently orbiting the sun between Mars and Jupiter.

Solomon was born and raised in Los Angeles and now lives in New York City. He and his wife Pamela have four children and eight grandchildren. 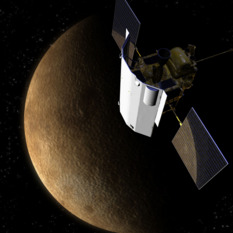 We open with the countdown to destruction—the MESSENGER spacecraft’s impact on Mercury ended its spectacularly successful mission. Principal Investigator Sean Solomon joins us immediately after this big finish. 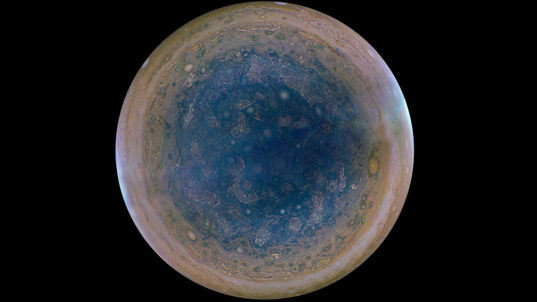 The Juno spacecraft soared over Jupiter's south pole during its fourth perijove flyby on February 2, 2017 and captured two images that were merged to create this view.