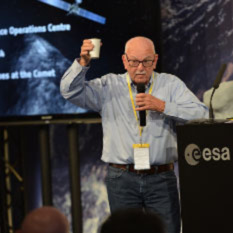 Samuel Gulkis is a Senior Research Scientist at the Jet Propulsion Laboratory. He is the principal investigator of the Microwave Instrument for the Rosetta Orbiter (MIRO) aboard ESA's Rosetta mission to the comet 67P/Churyumov-Gerasimenko. He was the Project Scientist for SETI from 1985–1994 and the JPL Section Manager for Planetary and Life Detection from 2002–2005.