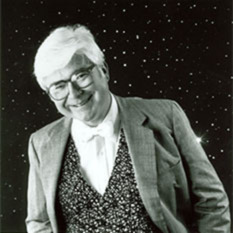 Dr. Robert L. Forward (August 15, 1932–September 21, 2002) was an American physicist and science fiction writer. His literary work was noted for its scientific credibility and use of ideas developed from his career as an aerospace engineer. He earned his doctorate from the University of Maryland in 1965, after which he went to work at the research labs of Hughes Aircraft, where he received 18 patents. He took early retirement in 1987 to focus on his fiction writing and consulting for such clients as NASA and the U.S. Air Force. In 1994, he co-founded the company Tethers Unlimited, Inc. with Robert P. Hoyt, where he served as Chief Scientist and Chairman until 2002.

Much of his research focused on the leading edges of speculative physics but was always grounded in what he believed humans could accomplish. He worked on such projects as space tethers and space fountains, solar sails (including Starwisp), antimatter propulsion, and other spacecraft propulsion technologies, and did further research on more esoteric possibilities such as time travel and negative matter. He was issued a patent for the statite, and contributed to a concept to drain the Van Allen Belts.

In addition to more than 200 papers and articles, he published 11 novels. Forward also co-authored two novels with his wife, Martha Dodson Forward, and two additional novels with his second daughter Julie Fuller. Forward also helped Larry Niven calculate the parameters of the Smoke Ring for his novel The Integral Trees.

In 2001, Forward received a diagnosis of terminal cancer which gave him enough time remaining to make his farewells and settle any unfinished projects. He died in his home in Seattle, WA on September 21, 2002. In his final months he rushed to try and finish his autobiography; what he was able to put together before his death has been made available at his request at www.robertforward.com.