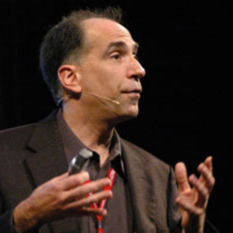 Dr. Rich Terrile is an astronomer and the director of the Center for Evolutionary Computation and Automated Design at NASA’s Jet Propulsion Laboratory. He uses techniques based on biological evolution and development to advance the fields of robotics and computer intelligence. He has a Ph.D. in Planetary Science from the California Institute of Technology and has developed missions to Mars and to the outer solar system. As a member of the Voyager imaging team, Dr. Terrile discovered four of the moons around Saturn, Uranus and Neptune, and took the first pictures of another solar system around the nearby star Beta Pictoris. His other interests include planetary rings, planetary geology, evolutionary computation and the development of medical instrumentation for tissue identification during neurosurgery.