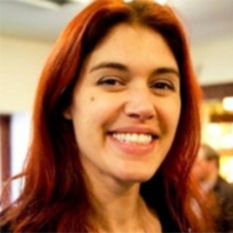 Rebecca Thomas' research is into the geology of Mercury, using new high-resolution imagery from the MESSENGER (MErcury Surface, Space ENvironment, GEochemistry, and Ranging) spacecraft, which went into orbit around the planet in 2011. Her focus has been specifically on the evidence for the role of volatiles at the planet's surface, first by investigating the enigmatic 'hollows', which appear to form by sublimation of a volatile substance which is exposed as a result of impact cratering, and then by studying the timing and mechanisms of explosive volcanism on the planet. In this latter area, she has discovered evidence for relatively recent volcanic activity on Mercury.

Before moving to Mercury, her undergraduate research was on Mars, looking at a different kind of recent activity: outflows from fresh-looking vents in the Cerberus plains region of Mars. There, through detailed mapping on HiRISE images, she showed that water and/or lava erupted from a series of vents in a ridge rising out of the plains and formed a complex series of channels and plains deposits, probably as recently as 11 million years ago.