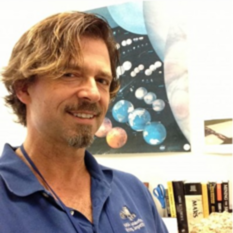 Dr. Philip Metzger is a senior research physicist at NASA’s Kennedy Space Center, where he founded and leads the Granular Mechanics and Regolith Operations Laboratory. He performs research related to solar system exploration: predicting how rocket exhaust interacts with extraterrestrial soil, investigating the mechanics of soil, characterizing lunar and martian soil simulants, modeling the migration of volatiles on airless bodies, etc. He leads the Agency’s work in rocket blast effects for human-class missions. He has participated in architecture studies for the Lunar Architecture Team, the Mars Architecture Team and the Lunar Exploration Analysis Group. He is also leading projects to develop extraterrestrial excavators, regolith conveyance technologies, dust-tolerant quick disconnects, lunar/martian landing pads, and other surface systems technology. He co-founded NASA’s biannual Workshop on Granular Materials in Lunar and Martian Exploration and was selected as Kennedy Space Center’s Scientist/Engineer of the Year for 2011. 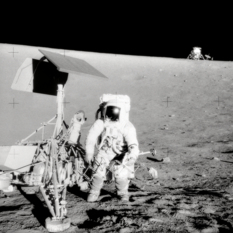 What can a 45-year-old mission to the Moon tell us about a "meteorite" flying past a skydiver on Earth?