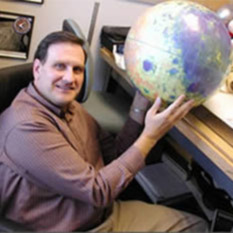 Paul Spudis is a planetary scientist at the Lunar and Planetary Science Institute. His research focuses on the geological history and evolution of the Moon and processes of impact and volcanism that have shaped its surface. He was Deputy Leader of the Science Team for the Clementine mission to the Moon, which mapped the Moon's topographic shape and surface color in the visible and near-infrared parts of the spectrum (where information on mineral composition can be extracted).

In recent years, he has become interested in the processes and history of the poles of the Moon, which have a unique environment and harbor significant water ice deposits. He was the Principal Investigator of the Mini-SAR experiment on the Indian Chandrayaan-1 mission to the Moon, which mapped the Moon from 2008–2009. The Mini-SAR imaging radar mapped the permanently dark regions of the poles and found reflections diagnostic of water ice deposits in permanently shadowed craters. He is a team member of a similar experiment, the Mini-RF, currently orbiting the Moon on NASA’s Lunar Reconnaissance Orbiter.  He is currently working on plans for follow-up robotic missions to the surface of the lunar poles to document the extent and variability of water ice there.

Photo and biographical information from LPI.