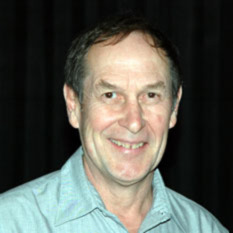 Laurence A. Soderblom is a geophysicist with the United States Geological Survey in Flagstaff, Arizona. He has been involved in numerous JPL planetary missions including the Mariner 6, 7, and 9, Viking, Voyager, Magellan, Galileo, Mars Global Surveyor, Mars Pathfinder, Deep Space 1, Cassini, Huygens, and the Mars Exploration Rovers. From 1978 to 1996 he twice served as Chief of the Branch of Astrogeology of the United States Geological Survey. During 1983-84 he was a Sherman Fairchild Distinguished Scholar at Caltech. He attended New Mexico Institute of Mining and Technology receiving two Bachelor Degrees in geology and in physics and Caltech where he received a PhD in planetary science and geophysics. Soderblom has been engaged in a broad collection of planetary research tasks including theoretical modeling of planetary surface processes and ground-based and spacecraft instrument development. Currently he is heavily involved in the Mars Exploration Rover and the Cassini-Huygens Missions.