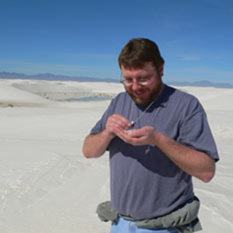 Ken Edgett’s research interests include Mars sedimentology, geology, and geomorphology, and sand dune studies on Earth. Edgett holds a Ph.D. (1994) in Geology from Arizona State University. He began working with Malin Space Science Systems (MSSS) in February 1998. His main responsibilities during 1998–2006 centered on targeting and review of the more than 240,000 images acquired by the Mars Global Surveyor (MGS) Mars Orbiter Camera (MOC). Now he is involved in selecting targets for the Mars Reconnaissance Orbiter (MRO) Context Camera (CTX) and he is the Principal Investigator for the 2011 Mars Science Laboratory (MSL) Mars Hand Lens Imager (MAHLI) investigation. In addition to his scientific work, Edgett founded and directed (1992–1998) the Mars K-12 Education Program at Arizona State University; he was a regularly-featured on-air contributor to the children’s science television program, Brainstorm, produced and aired by KTVK-TV (Channel 3) in Phoenix, Arizona (1997–2002); and he co-authored (with Peggy Wethered and illustrator Michael Chesworth) a children’s book, Touchdown Mars! An ABC Adventure, published in 2000. Edgett’s first published short fiction is in the 2008 anthology, Return to Luna, from Hadley Rille Books. 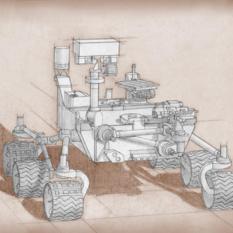 The Right Site: Choosing A Landing Spot on Mars

The 2020 Mars Rover may be years away, but determining where it will land is already a hot topic among scientists and engineers. Many of the former gathered in early August for a site selection workshop. We talk with Co-Chair and Mars veteran Matt Golombek, JPL astrobiologist Lindsay Hays, and Ken Edgett of Malin Space Science Systems. 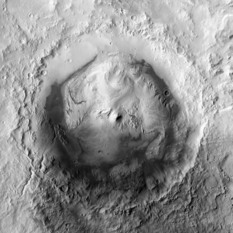 The Martian Craters Asimov and Danielson

The Martian Craters Asimov and Danielson