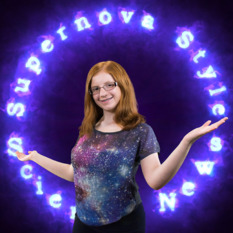 Julie Seven Sage is a 13-year-old aspiring astrophysicist. She has wanted to be an astrophysicist ever since she was 6 years old. At 10 years old she took her first Harvard college course through edx.org, and passed with flying colors with a score of 96%. Later she took a public speaking course and got a perfect score of 100%. Since 2015, Julie has been grinding her own telescope mirror: an 8 inch, focal length 6 mirror. Julie also has been learning how to code in multiple languages, including python, java, and HTML. In 2016 she started her own YouTube channel called "Supernova Style Science News" where she shares amazing news in a very entertaining way. She also participated in the Cubes in Space program, a program where kids design experiments and then send them up on a NASA rocket and/or balloon. Her group had six experiments submitted and all got accepted, two flew on the rocket, and four will be on the balloon. Julie has been on the front of a newspaper two times, and has had one live interview on TV. She also has given a presentation at one of ATMoB's (Amateur Telescope Makers of Boston's) meetings. 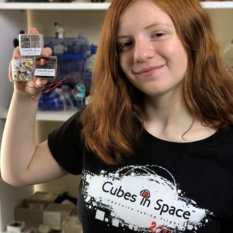