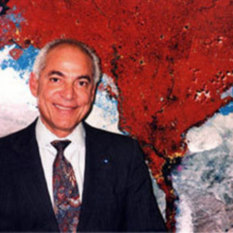 Dr. Farouk El-Baz is a noted geologist, Director of the Center for Remote Sensing and Research Professor at the Departments of Archaeology and Electrical & Computer Engineering, and Associated Faculty at the Department of Earth and Environment at Boston University.

El-Baz holds a B.S. in chemistry and geology from Ain Shams University, a M.S. in geology from the Missouri School of Mines and Metallurgy, and a Ph.D. in geology from the University of Missouri-Columbia after conducting research in 1962-1963 at the Massachusetts Institute of Technology (MIT). He has also received a number of honorary degrees. El-Baz participated in the Apollo Program, the Earth Observations and Photography Experiment on the Apollo-Soyuz Test Project (ASTP), and multiple desert expeditions. He is the author or editor of landmark books on the use of space photography to define geological features. He has also chaired several scientific committees and has won numerous awards and honours, such as NASA’s Apollo Achievement Award.

A full biography can be found on the Boston University website.