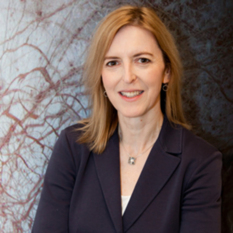 Louise Prockter is the Director of the Lunar and Planetary Institute in Houston Texas. Dr. Prockter has been involved in robotic planetary missions throughout her career. She served as an Imaging Team associate on the Galileo and Near-Earth Asteroid Rendezvous (NEAR) missions; was a Deputy Project Scientist and Co-Investigator on the MESSENGER mission; was a Deputy Project Scientist for the Europa Clipper mission, and is currently a Co-Investigator on that mission’s camera team. Dr. Prockter earned her Ph.D. in Planetary Geology from Brown University. She has participated in numerous NRC advisory panels, including the Committee for Planetary Exploration (COMPLEX), the Space Studies Board, and the Planetary Decadal Survey, as well as NASA’s Planetary Science Subcommittee. Dr. Prockter’s scientific research focuses on the geomorphology and structural tectonics of icy satellites and other solar system bodies. She is a Fellow of the Geological Society of America.