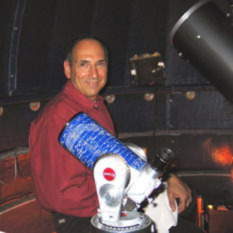 David H. Levy is a Canadian astronomer and science writer who co-discovered Comet Shoemaker–Levy 9 in 1993, which collided with the planet Jupiter in 1994. Levy was born in Montreal, Quebec, Canada, in 1948. He developed an interest in astronomy at an early age. However, he pursued and received bachelor’s and master’s degrees in English literature.

Levy went on to discover 22 comets, either independently or with Gene and Carolyn S. Shoemaker. He has written 34 books, mostly on astronomical subjects, such as The Quest for Comets, a biography of Pluto-discoverer Clyde Tombaugh in 2006, and his tribute to Gene Shoemaker in Shoemaker by Levy. He has provided periodic articles for Sky and Telescope magazine, as well as Parade Magazine, Sky News and, most recently, Astronomy Magazine.

On February 28, 2010, Levy was awarded a Ph.D. from the Hebrew University of Jerusalem for his successful completion of his thesis "The Sky in Early Modern English Literature: A Study of Allusions to Celestial Events in Elizabethan and Jacobean Writing, 1572–1620." The asteroid 3673 Levy was named in his honor. Levy was awarded the C.A. Chant Medal of the Royal Astronomical Society of Canada in 1980. In 1993 he won the Amateur Achievement Award of the Astronomical Society of the Pacific. In 2007, Levy received the Smithsonian Astrophysical Observatory's Edgar Wilson Award for the discovery of comets. In 2008, a special edition telescope, "The Comet Hunter" was co-designed by Levy.