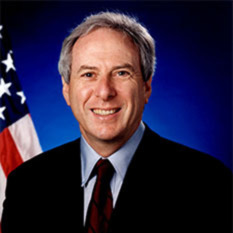 During his tenure as NASA's longest-serving Administrator, Daniel S. Goldin initiated a revolution to transform America's aeronautics and space program. Despite lower budgets, his "faster, better, cheaper" approach has enabled the Agency to deliver programs of high value to the American public without sacrificing safety.

When Goldin became Administrator in the spring of 1992, outside observers perceived the Agency to be a bloated bureaucracy pursuing missions that were too expensive, took too long to develop and flew too infrequently. NASA also was criticized for an imbalance between human and robotic missions.

Through Goldin's aggressive management reforms, annual budgets have been reduced, producing a $40 billion reduction from prior budget plans. He implemented a more balanced aeronautics and space program by reducing human space flight funding from 48 percent of NASA's total budget to 38 percent and increasing funding for science and aerospace technology from 31 to 43 percent.

In presenting Goldin with a 1998 Laurel Award for outstanding achievement in aviation and aerospace, Aviation Week & Space Technology magazine said he has "delivered on his promise to reshape NASA into a model government agency."

Goldin also cut the time required to develop Earth- and space-science spacecraft by 40 percent and reduced the cost by two-thirds, while increasing the average number of missions launched per year about four times. During the same time, Space Shuttle costs were reduced by about a third, while all safety indicators and mission capabilities have achieved significant improvements.

The New York Timesreported that space analysts attribute the new era of revitalization at NASA "to the influence of Dan Goldin...(who) in 1992 started a vigorous campaign to make the agency's products smaller, cheaper, faster, and better. He is still pushing that agenda hard." This approach has been applied successfully to NASA's Earth climate observation missions. Under his leadership, the Earth Science program has been refocused to fly more spacecraft and collect more measurements for less than half the cost of what had been planned in 1992.

Defense Business, which named Goldin among the world's top 40 most influential defense-industry leaders, said he "has tightened the workforce, introduced a stunning array of new missions, including information-gathering journeys to the Moon and Mars, and become the major player in the embryonic International Space Station." In naming him one of the 100 most influential men and women in government, the National Journal observed that "most space watchers say that Goldin is a brilliant visionary who brought NASA back from the brink of a black hole."

Nowhere has Goldin's vision been more evident than in his comprehensive strategy for space exploration. He initiated the Origins Program to understand how the Universe has evolved, to learn how life began on Earth and to see if life exists elsewhere. He led a rescue plan for the successful installation of a "contact lens" on the Hubble Space Telescope, leading to startling discoveries of the cosmos. Goldin challenged Origins planners to search for Earth-like planets within 100 light years of our planet. He also laid the foundation to complete the first scientific census of the solar system and to send the first probe into interstellar space.

Goldin has been a vigorous proponent for increased exploration of Mars and has established a series of robotic missions that will visit the planet every two years for the next decade. These missions are being developed in one-third the time and at one-tenth the cost of previous Mars expeditions. Featuring new technologies such as planetary rovers, penetrators and sample returns, these missions are designed to determine if life and water may have existed on Mars. These expeditions will be instrumental in the development of human missions to Mars that Goldin believes could occur early in the next century.

To expand opportunities for public and educational participation in the adventure of space exploration and research, Goldin directed NASA's program managers to incorporate Internet access into mission outreach plans. This new policy attracted over three-quarters of a billion "hits" for the Mars Pathfinder mission, while CNN reported an unprecedented half million hits per minute during its Webcast of STS-95, the mission which included John Glenn's return to flight. In 1998, Yahoo Internet Life magazine selected the NASA site as one of the 12 best on the World Wide Web, and for two consecutive years has named it the "Best Astronomy Internet Site."

Goldin played a pivotal role in redesigning the International Space Station. Starting with the Space Shuttle program, he has established a goal to transfer day-to-day space operations to the private sector. This will enable the Agency to dedicate its resources to long-term, high-risk research and development and help establish a permanent human presence beyond low Earth orbit. To ensure a robust future for the aerospace industry and to build new commercial opportunities in space tourism, he challenged NASA's Aero-Space Technology program to make space travel 10,000 times safer and 100 times cheaper.

Before coming to NASA, Goldin was Vice President and General Manager of the TRW Space and Technology Group in Redondo Beach, CA. During a 25-year career at TRW, Goldin led projects for America's defense and conceptualized and managed production of advanced communication spacecraft, space technologies and scientific instruments. He began his career at NASA's Lewis Research Center, Cleveland, OH, in 1962, and worked on electric propulsion systems for human interplanetary travel.

Goldin is a member of the National Academy of Engineers and a Fellow of the American Institute of Aeronautics and Astronautics.

Since leaving NASA, Daniel Goldin has engaged in robotics research at the Neurosciences Institute in La Jolla, California. He is currently the President & CEO of The Intellisis Corporation, a company which he founded in 2005.

Photo and biographical information from the NASA History office and Wikipedia.