Adolf Schaller is an award-winning science and astronomical artist whose work is widely celebrated for its scientific accuracy and startling realism. During his 35-year career as a graphic and animation artist, Schaller has set a standard of excellence unmatched in the field of scientific visualization and is considered among its foremost practitioners by the scientific community.

His clients have included NASA, European Space Agency, Hubble Space Telescope Science Institute, Astronomy Magazine, Adler Planetarium and Astronomy Museum, Griffith Observatory and Carl Sagan. His honors and awards include a Primetime Emmy award for Outstanding Individual Achievement for his visual effects work on Sagan’s Cosmos series. His work also figures prominently within and on the cover of Sagan’s bestselling book, Cosmos, based on the series. 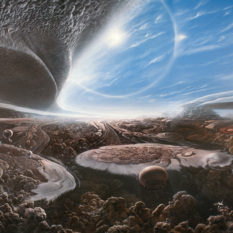 Creating Life on a Gas Giant

Adolf Schaller, an artist on the original Cosmos series, shares his experience of creating the painting, "Hunters, Floaters, and Sinkers" from Episode 2, which speculates about the possible life living in the turbulent atmosphere of a gas-giant planet.