Visiting a Solar Sail in the OC

The city of Tustin is about an hour's drive from Planetary Society HQ in Pasadena. That's when the freeway gods are kind, which they never are. The trip I made there yesterday was well worth the trouble. I parked next to the industrial park offices of L'Garde, Inc and walked into a plain vanilla reception area, the kind you've probably visited a hundred times, if you don't work behind one.

The plain vanilla soon turned to ultra chocolate with walnuts and fudge sauce. This relatively small company, founded more than 40 years ago, bills itself as "the world leader in hybrid inflatable deployed space structures." Their high bay makes a good case for that lofty statement. It's where they are building a big solar sail that may leave our planet in 2014. It's also where lots of L'Garde staff were joined by NASA's brand new Chief Technologist, Mason Peck. 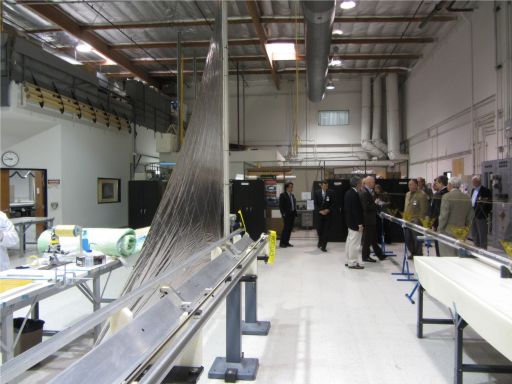 Peck got the job in January. His distinguished record of innovation and leadership resulted in an offer from NASA Administrator Charles Bolden that he couldn't refuse. He was a good choice for the job. His enthusiasm for developing and sharing space technology was obvious and even uplifting. This guy is a true believer. Turns out that my colleague, Planetary Society Director of Projects Bruce Betts, already knew all this. Mason is on loan to NASA from Cornell University, where he has worked closely with Bruce and others on the development of microrovers.

Mason has begun by visiting NASA centers throughout the country, along with agency partners and contractors like L'Garde. The company received a Technology Demonstration Mission (TDM) contract for development of the sail that is now coming together.

I was surprised to learn that another guest of honor yesterday was my Congressman. Dana Rohrabacher is the Republican representative of California's 46th District. He may be better known as a surfer than for his interest in space development, but it was space that got his enthusiastic attention yesterday as we toured the high bay. I was pleased to hear the Congressman talk about his concerns regarding the proposed NASA budget. He opposes cuts to Mars and other planetary science missions, and he praised the Planetary Society as a good partner in the fight for restoration. He also complained about his colleagues' lack of interest in the threat posed by Near Earth Objects, but most of his comments were about the tremendous importance of innovation for the future success of the US economy.

Hanging on the back wall was a copy of L'Garde's huge Inflatable Antenna Experiment that was successfully deployed by the crew of STS-77. L'Garde's Nathan Barnes and others told us how that and other projects helped the firm prepare for building a solar sail. 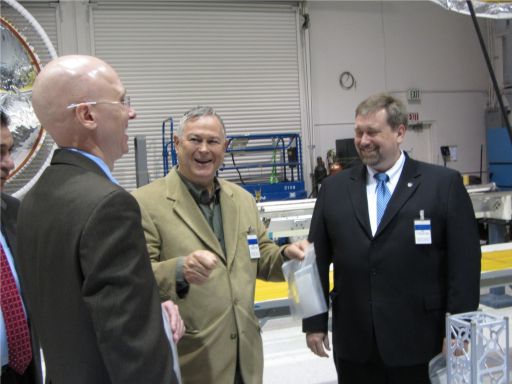 We were shown a thirty-meter long spar laid out along a table. Amazingly, it weighs just over a kilogram, or about 2.5 pounds. A similar structure will be part of the sail's skeleton. The gas that expands it in space just gets things started. Once inflated, the cold of space will stiffen the structure, providing the frame for an incredibly thin (1,000 angstrom) 1,200 square meter Kapton sail. We could easily see the ceiling lights through a sail section suspended in the high bay. 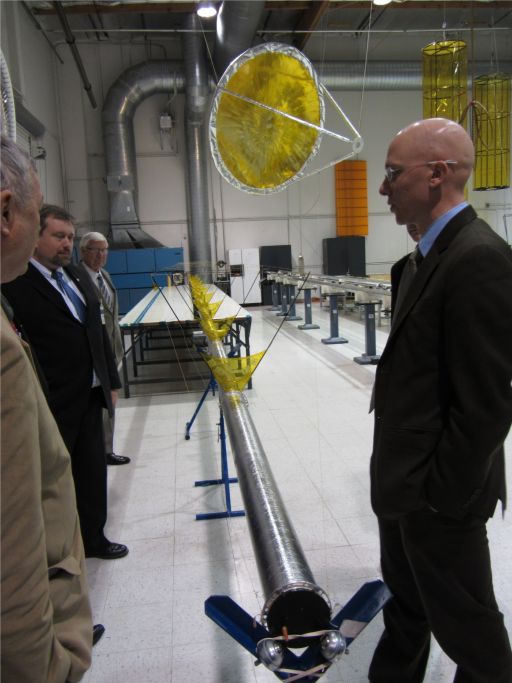 Thirty meter spar or support member for the 1,200 square meter solar sail under construction at L'Garde.

The launch mass of the entire spacecraft will be about 112 kilograms. By comparison, the Planetary Society's much smaller LightSail 1 weighs less than 5 kilograms. After deployment, small vanes at the sail's corners will steer it to the L1 Lagrange point in space. At least, that's the plan. Testing navigation of this huge ship is one of the primary goals of the mission.

L'Garde is pretty confident. Here's an animation of an even larger sail they'd like to build. It would spread its wings across 10,000 square meters. The company gives lots of credit to The Planetary Society and our Lou Friedman as pioneers in the development of these craft that may someday fly among the planets and even to other stars. We wish them luck.

There's much more to tell. I collected lots of audio that I'll share with you on an upcoming episode of Planetary Radio.