A new installment of our "Snapshots" video series examines the threat posed by asteroids on collision courses with our home planet. Emily Lakdawalla explains why it's so important to find, understand and learn to deflect these potential civilization enders. After all, we don't want to go the way of the dinosaurs. And speaking of dinosaurs, lots of viewers are asking us where they can get Emily's awesome t-shirt! It's just one of many great designs by Shawn Coss. We love his work.

And while we're on the subject of planetary defense, you might want to listen to my Planetary Radio conversation with Alison Gibbings. Alison is on the team that is exploring development of "laser bees." These would be swarms of solar-powered, raygun-toting spacecraft that would deflect asteroids through laser ablation. It's just one of many Near Earth Object projects supported by the Planetary Society. 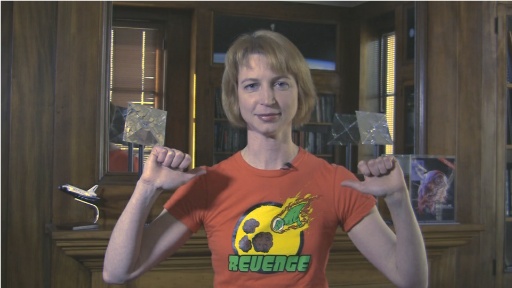 
Still image from 3-5-12 Snapshots From Space