“Wanderers”: A Glorious New Film About Where We May Voyage

A space elevator and airships suspended over Mars. Winged visitors soaring through Titan’s thick atmosphere. BASE jumping from Miranda’s stark and towering cliffs. Holy cow. That’s what I said to Emily Lakdawalla after she pointed me toward this short film that surpasses any superlatives I can think of. I watched it three times before I paid much attention to the borrowed narrator, an inspiring fellow named Carl Sagan. 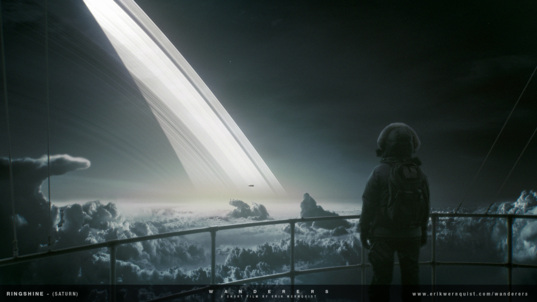 “Wanderers” is obviously a labor of love from Swedish filmmaker and CGI artist Erik Wernquist. I’m frightened to think of the time he must have put into its production. This is the sort of work that generates feature credits for hundreds of people. Yet Erik appears to have done all the effects and artistry himself. The animations are beautifully integrated with live action photography, putting men and women in believable locations throughout our solar system.

This film isn’t just beautiful. It is the stuff of dreams. And dreams can and have driven humans to build, experiment, learn and explore. See it now. Congratulations, Erik! And thanks.

This is probably the best short film I have ever seen. I was going to email it to your contact us page, but decided to search the site for it first! For those interested, this link opens up in full screen for a more immersive experience. http://player.vimeo.com/video/108650530

Hello, I agree with you, "Wanderers" is really great. But what about "Ambition"?

Sorry, the address is http://ambitionfilm.com/