Neil Armstrong: A Life of Flight By Jay Barbree

Ensign Neil Armstrong was in the cockpit of his F9F Panther, high over the ugly hills of North Korea. He pushed the stick forward, diving toward a bridge and releasing his 500-pound bomb on target. Moments later, a tremendous shock tore through his jet. An anti-aircraft cable had ripped off most of his right wing. Barely able to keep the plane in the air, the young aviator fought to reach friendly territory. He got that far, but there was no way he could land. Armstrong reviewed the instructions for activating his ejection seat. Bracing his body and jaw, he launched himself free of the doomed fighter. A moment of tremendous force, and then…nothing. Zero-G. 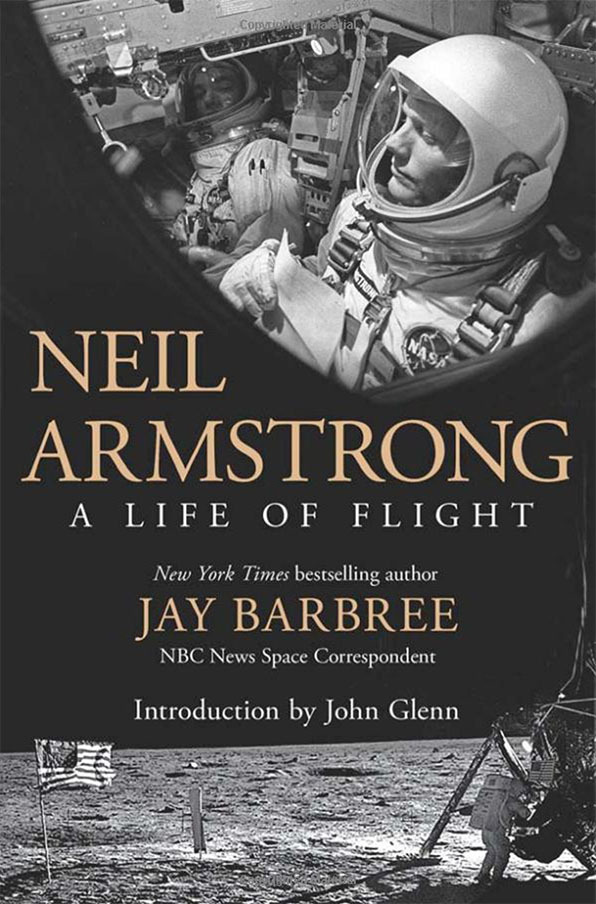 Neil Armstrong: A Life of Flight

In spite of all he had just been through, those seconds of free fall before opening his chute would make a lasting impression on Armstrong, who was already attracting attention for his skills, his cool intellect, and his quiet authority. He would remember that sensation years later when Gemini 8 achieved Earth orbit. His first trip into space would again prove that Neil was brilliantly and almost uniquely well-suited to command the first mission that landed humans on the moon.

These are among scores of lovingly-told stories from Jay Barbree in Neil Armstrong: A Life of Flight

, his new book about the first man to step on a body other than Earth. Jay was my guest on the July 28, 2014 edition of Planetary Radio. It was a delight to talk once again to this NBC correspondent who has reported on every American spaceflight that has carried humans skyward, from Alan Shephard onward.

This wonderful and very personal book, written with the support of Armstrong and many of the other pioneering astronauts, relies on the trust these explorers put in Barbree. They knew he would get it right, and they knew he could be trusted to keep some stories to himself. Jay told me there is much more he could have revealed, but never will.

Not that readers will have any sense that they are being denied. You’ll get an insider’s insights into the characters and conduct of nearly all the Mercury, Gemini and Apollo astronauts. You’ll read about the bonds among this band of brothers that extended to the Soviet cosmonauts who hoped to beat them to the Moon. There are no pulled punches when Barbree describes the mistakes that were made—mistakes that sometimes hobbled, and sometimes killed.

Particularly poignant is the tragedy of Apollo 1. Buddies Ed White and Armstrong were more than next-door neighbors. They fished together. They bought three lots outside Houston and split them between their families. It was Ed White who late one night ran barefoot with a garden hose to his neighbor’s burning house. And it was Janet Armstrong who would go next door to console Pat White and her children when they learned about the horrendous fire that killed Ed White, Gus Grissom and Roger Chafee.

The far larger bulk of this book is a series of hard-won triumphs. They include thrilling, second-by-second recounts of the greatest successes out there in the void. It takes us beyond Apollo to the Space Shuttle era, and through the frustration felt by Neil and others over the lack of commitment and vision required to take humans beyond low Earth orbit.

My only mild criticism is of some shaky science in the last section of the book, as Jay Barbree and Neil Armstrong look toward the future. But these inconsequential lapses don’t detract from a great read about a quiet man who may have been the best of the best at what he did, and about a time of towering achievements that will live forever, written by a reporter who was there every step of the way.

I have read many books along this subject line by those who did and those who were the boss. All were intriguing reads and this one should be no exception. I watched this reporter over the years along with his colleagues and they all did a first rate job educating the public with their reporting. What these astronauts and engineers did was mind numbing! Reading the 'behind the scenes' type stories does trigger the 'oh wow I remember that moment' times and possibly what you were doing then. This stuff was not boring in anyway at all. This is what we, today's parents and grandparents, watched being developed, not improved upon, because it was never done before. In fact we had no idea how to get into space with an astronaut. We were still trying to learn how to fly airplanes greater than mach 3 in most of those early times, for example.