And a Video Tour of Marc Rayman's Space Collection

You think you're a space geek? I bet you're no match for Marc Rayman. Judge for yourself, when you watch a video tour of Marc's home. You'll see his space library, the mission files he has maintained and expanded since childhood, the beautiful artwork, and the entertaining keepsakes. You'll also learn why he was investigated by the FBI, and you'll meet Event Horizon, his rescued iguana.

Marc comes by his magnificent obsession honestly. Fans of the Dawn mission to Vesta and Ceres know that he serves as both Director and Chief Engineer. But Marc has contributed to many other missions during his long tenure at the Jet Propulsion Lab. And you can bet that he has a file dedicated to every robotic explorer or human space voyage, whether he worked on them or not.

In early September, Dawn became the first spacecraft to orbit one world and then leave for another. After a year circling Vesta, the ion engine is sending the probe to an even bigger object in the asteroid belt: mighty Ceres. It won't arrive till February of 2015, but even that 2.5 year cruise won't be enough time for scientists to analyze the enormous amount of Vesta data sent to Earth.

Fans of the mission have enjoyed Marc's Dawn Journal for more than six years. He has also been my guest on Planetary Radio several times. This week's show features his latest visit. It was great to finally meet face-to-face at his lovely home. After getting his update on Dawn, Marc graciously allowed me to follow him around with the Planetary Society video camera.

I hope you enjoy both our Dawn conversation and the tour as much as I did. Smooth sailing, Dawn! 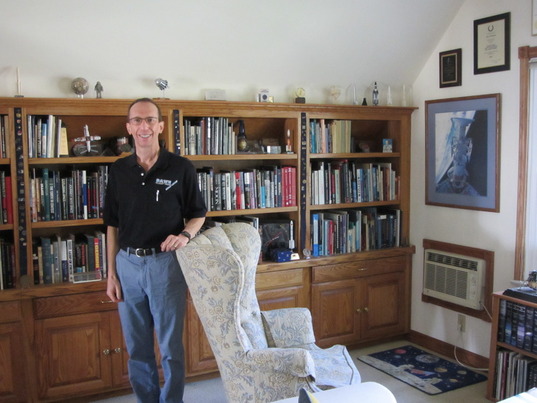